Topics include Things to Do, Dining Scene & more!

The United States uses the United States dollar as its currency. The dollar is one of the world’s most common currencies and is convertible to most other currencies. Recently many of the paper bills have been redesigned with additional security features including the use of microprinting, colors and larger faces on the bills. Old-design bills, however, are still in circulation. Keep in mind that if you return home with large amounts of old-design bills, your local banks may be unwilling to exchange them for fear of receiving older counterfeits.

There is a large variety of different coins in circulation. In many cases, for a particular denomination the coins will have an identical front but totally different backs. On some quarters (25-cent coin), varying states may be commemorated on the back of the coin. This means that there are at least 50 different quarter designs, in addition to the traditional eagle and the 1976 bicentennial commemorative quarter. The nickel (5-cent coin) has also been totally redesigned recently to commemorate the Lewis and Clark bicentennial, with buffalo and nature scenes on the reverse, and a quarter-profile of Jefferson on the front. However, the old versions with Jefferson’s profile and Monticello are still in circulation.

There are also several dollar coins in circulation including a silver colored one called the Susan B. Anthony dollar and the more recent gold colored coin featuring a famous American Indian woman, Sacagawea, on the front. For cultural reasons, however, Americans haven’t taken to the dollar coin in the same way Canadians use their loons or Europeans their 1- and 2-Euro coins. The only time you’ll receive the coins are from vending machines and the occasional bank that keeps a few on hand for collectors.

Many "regular" checking accounts offer free online billpaying options. However, be aware, that "free" may not be so. Be sure to read the fine print. There are often other charges tied to checking accounts (which many travellers will know as chequing accounts) such as check processing fees, ATM fees and overdraft fees.

In order to open a bank account in the United States, the federal government requires that you have a social security or tax identification number. If you are visiting the United States for a while you can apply for a TIN. If you intend to use your overseas bank card or credit card, be certain that you have a PIN (personal identification number) that will work internationally (usually 4 digits) and that you know how much each transaction will cost (minimum and percentage exchange rate fees).

Some U.S. banks will only change currency for bank customers, but that is the exception. As long as you have proper identification (passport) and a major currency, most will exchange it for you. It is best to call ahead to verify that you will be able to make the exchange.

It may or may not be wiser to bring traveler’s cheques or use the ATM, depending on your bank’s policies and fees. However, it’s always good to arrive with some currency on hand.

Whilst years ago cashing a traveller's cheque may have been no trouble at any location with proper photo identification, this is progressively changing.  Many banks no longer cash these cheques unless you have an account with them and other businesses require a spend requirement for cashing (eg the spend is greater than 75% of the value of the cheque).  Travel cards are accepted and used the same way credit cards are used. Travel cards are debit cards, and they work like a credit card but are pre-loaded with your funds. They can be used in ATMs or at businesses.  You should check the fees to be paid, especially for ATM usage.

In the United States, the credit card is king, be sure to check with your financial institution that issued your credit card to find out their fees on foreign exchange. Sometimes you are better off using one particular card over another. No matter what method payment you use you will have to pay an exchange rate. Some establishments will try to disallow the use of credit cards for small purchases. Also, some smaller restaurants still operate as "cash only" -- be sure to ask before dining if you are out of cash. You'll also want to keep some small bills in your wallet for the many toll roads and bridges you may encounter, especially along the east and west coasts. Some take credit or ATM cards, but most do not.

If you have a "chip-and-PIN" credit card as used in the UK and most other countries around the world, you'll find that it is nearly always treated in the old-fashioned way - i.e. the retailer swipes the magnetic stripe and you sign the printed slip. However, some establishments might have "chip-and-PIN" enabled equipment, but the employees don't know how to use it. When they swipe the card, they see a message on the machine asking them to "Enter the card, chip-side up," or similar, which they don't understand. If this happens, they may want to reject the card, in which case you may have to talk them through the process. Also, it may be difficult to enter the PIN as they won't necessarily have a PIN-pad within reach of the customer. Be careful, as the old-fashioned ''swipe and sign'' method is still used in the United States, this means that credit card fraud levels are very high (highest in the world at 47%) and if your card is stolen, it is extremely easy for the thief to use your card as they can simply fake your signature (as no PIN is required) and no one usually checks. Card skimming is also highly prevalent due to the old system used.

At gas stations, all the pumps are Pay at the Pump. Most of them require the ZIP code pertaining to the credit card, but not a PIN. UK post codes are not valid, so you must take your card to the cashier and pay for the fuel you estimate you need. If your tank takes less than you have paid for, the cost is deducted from your card. Some pumps dont require a ZIP code, so you can use your card, again without a PIN, so it's worth trying your card first.

An important tip for German travellers is the fact that customers of Deutsche Bank are not charged for withdrawals from ATM machines that are operated by Bank of America.

If you plan to travel to the USA with a GPS device in tow (TomTom, Garmin, Magellan....) please note that many of these carry little applications that will indicate where to find an ATM machine in a given area; it is just a matter of investigating the company website or the computer application that comes with your device. For operators of iPhones and Blackberries, similar technology exists, so keep an eye open for it: it may help you get your cash even in the most remote parts (the stretch from Flagstaff Arizona through to San Diego being an example.)

When using an ATM in the USA, note that some machines may differ from those in other countries. Occasionally, after entering your PIN your card will be returned to you and not held in the ATM until your transaction is complete. Pocket your card and continue.

In 2015, very few ATMs are chip and PIN enabled in California, Arizona and Nevada. This may apply to all other states.You will NOT be able to withdraw cash from  a non chip and PIN  ATM. As stated below, some banks, allow you to  withdraw cash over the counter using a debit card, but you must present your passport as ID. No fee is charged. ATMs charge a minimum fee of $3 for withdrawals using a US debit card.

Also, many banks, gas stations,  and supermarkets will give you cash over the counter (called "cash back") with your debit card and ID. Getting cash back in a supermarket when you make a purchase is a good option if you are trying to avoid ATM fees, which can be charged both by the bank which owns the ATM, and your home bank.

"This is All Wonderful, but How Do I Tell it Apart Quickly?!"

Generally, the larger currency is all the same color: green. This can be frustrating for visitors as it can mean pulling out a huge bill when all you really need is one dollar to buy your son a chocolate bar!  The key is to pay attention to the face on the front of the money: George Washington=$1.00, Thomas Jefferson=$2.00, Abraham Lincoln=$5.00, Alexander Hamilton=$10.00, Andrew Jackson=$20.00, Ulysses Grant=$50.00, and Benjamin Franklin=$100.00.  Each of these bills is shown below; all are current designs. If you need assistance on the run simply print this webpage and cut out the image. 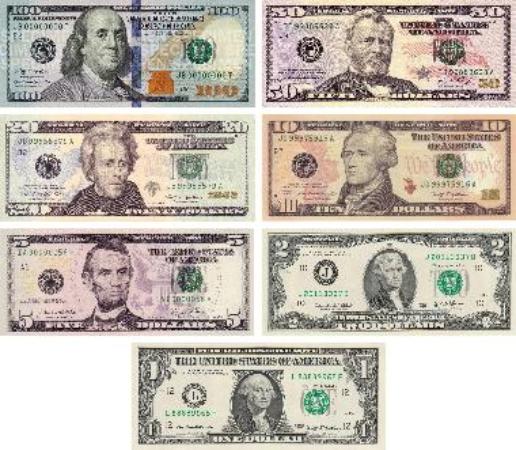 As it is noted above, there is a great variety in how the coins appear, but generally speaking you'll find Lincoln on the penny (1¢)  Jefferson on the nickel (5¢) Franklin Delano Roosevelt on the dime (10¢) and George Washington on the quarter (25¢)   Coins with larger denominations are available but are less used; a good tip is to stick to the first four and you won't go wrong when trying to get a soda from a vending machine or the like.

A Note on Large Bills, Slang and Denominations:  Be aware that many places will not accept hundred dollar bills and some, much fewer, will not accept fifty dollar bills.  An example of the former is a late night or all-night gas station or convenience store,; an example of the latter is a Starbucks in Manhattan.  So be sure that you have some twenties  on hand, don't expect that a fifty or a hundred will be accepted everywhere. A dollar is often called a 'buck', as in 'That cost  twenty bucks'.  Other slang not in very common usage but that may still be heard is:  a hundred dollar bill is a "C-note' or "Century-note" and a five dollar bill is a 'fin', while a quarter is 'two bits'.   The two-dollar bill is a novelty item, while legal tender it is almost never seen in circulation.