US$60
View deal
PricelineUS$61
eDreamsUS$61
Orbitz.comUS$60
View all 12 deals
Prices are the average nightly price provided by our partners and may not include all taxes and fees. Taxes and fees that are shown are estimates only. Please see our partners for more details.
blakechrisblake
portsmouth
514

At present with the pound to euro conversion being so poor it is very expensive but it was well worth the money.

here are some prices for you -

All in all if you stay in these chalets you will not be disappointed, and Levi is just lovely and so much fun.More 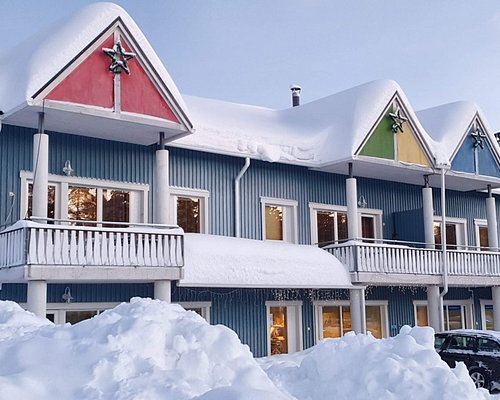 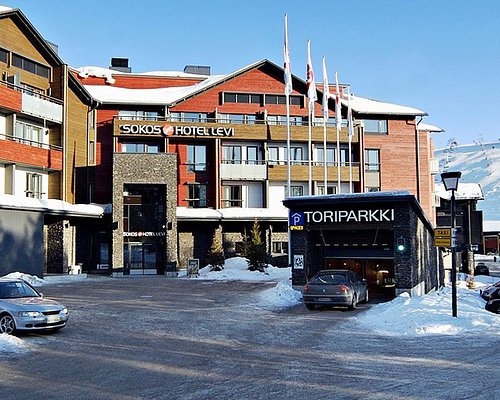 Breakfast included
Break Sokos Hotel Levi
US$132
US$110
Booking.com
View deal
Free cancellation
Expedia.com
US$110
Hotels.com
US$110
StayForLong
US$132
View all 18 deals from US$110
486 reviews
0.3 km from Levilehto Apartments
We compared the lowest prices from 18 websites 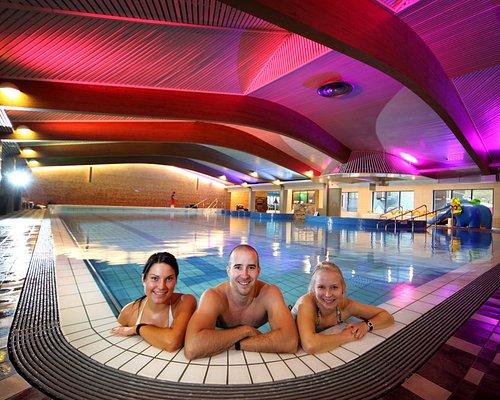 Hi, this was the sixth year to levi and one of the best, there were 15 of us all together in 4 families all staying at these chalets and we all had different ones. They were all good but the one's for 4 people are really small, we had one for seven, it had 3 bedrooms, living area fully fitted kitchen with everything you need including washing machine if you need one. your 10 minutes for the slopes, town center and supermarket. We booked through inghams again and can not fault them at all, even though we did not see our rep until we were leaving. Things did seem at lot more costly this year but thats probably due to the poor exchange rate at the moment. If you are going here for the first time i recommend it. Please go on the huskies, raindeer, snowmobiles and go on the hunt for santa.

This review is the subjective opinion of a TripAdvisor member and not of TripAdvisor LLC.
mcmanus15
NEWCASTLE
2329
Reviewed 30 October 2008
levilehto chalets are tops!!!

my family have stayed here four times & will be back in feb 09.
sitting close to village,a few minutes from the supermarket & a further five minutes to the first lifts.
the chalets are comfortable & compact, all have sauna,s,tv,s,microwave etc.
dry room in main entrance to store your snowboards & clothing,sledges stored outside.
all the staff are friendly, the location is peaceful & quite, if your luckly you will see some wildlife, the bus stop from lift 6 drops right outside & the main bus stops in the village for the super "g"
ten minutes away.

This review is the subjective opinion of a TripAdvisor member and not of TripAdvisor LLC.
VickySouthampton
Southampton
27
Reviewed 27 March 2008
Levilehto is great

We stayed at the Levilehto in December. The apartment was very modern and had everything we needed. We booked the smallest apartment, we have 2 young children and caravan regularly so are used to being in a small space. Our rep agreed that whilst the apartment was small we had more space than we would probably get in a hotel room. With caravans just outside the window we felt right at home!! We ate in most days and the supermarket just across the road stocked everything we needed. Walking to the ski slopes in our ski boots was just about bearable - wouldn't have wanted to walk much further in them. Once we had worked out how to balance 4 pairs of skis on a toboggon we were fine. The apartment was warm and cosy, so warm that we didn't even get to light the fire. We ordered a welcome pack and all of our groceries were waiting for us upon arrival, we just paid at reception the next day. We would definately recommend these apartments they may not look as picturesque as the log cabins but inside they are fab.

This review is the subjective opinion of a TripAdvisor member and not of TripAdvisor LLC.
OceanShell
Bristol, United Kingdom
120
Reviewed 27 January 2008
Brilliant Chalets - Excellent value for money.

A group of 6 of us (aged between 23-29) stayed at the Levilehto Chalets from the 13th-20th January 2008. We originally booked it because it was one of the chepest in the Inghams brochure & also because it wasnt too far from the front slopes (300m).
When we arrived it far exceeded our expectations! It was brilliant & had everything we could possibly need.

We had a 4 room chalet. Downstairs there was a kitchen/living area, a twin bedroom, a toilet, a shower & sauna room and a hallway/lobby area for storage of ski's, boots coats etc.
Upstairs there were 2 twin bedrooms which had windows looking down onto the living area - giving it a nice/interesting feel. There were also windows on the outside walls - allowing light into the room (on the fews hours of light we got)! All the windows had blinds and all the bedrooms had adequate cupboards for clothes storage.

Extras included; underfloor heating, washing machine, TV, CD player, dishwasher, microwave, cooker, grill, oven, cutlery, pots pans, glasses etc!
There was also this great clothes dryer in the hallway/lobby area. This was perfect for drying out gloves, or any clothes that you washed in the washing machine. We'd put them in there after skiing & they'd be dry by the morning! Very useful!

The location was great - It took about 10-15 mins to walk to the front slopes & ski lifts. That is carrying our skis & poles (would be quicker without having to carry them i.e. if you got a locker for them). We were also really close to the supermarket etc. Levi was fairly small so not that far from anything really.

We stayed there through Inghams. We had decided to stay half board because we had heard it was expensive to eat out in Levi. However we were all in argreement that if we went again we would choose to go self catering.
The hotel was only over the road (convenient) but the food was bland & uninteresting. It was buffet style & there was a fair amount of choice: A soup, salad, pastas/rices, bread for starters. The main was usually a choice of a fish dish and a meat dish, with some form of potato or rice and veg.
It was ok, but where it had all been sat in big silver heated pots (waiting to be dished up) they didnt look hugely appetising. After the 1st couple of nights we got quite bored of it.

We ended up eating out twice - once at the Steakhouse & once at the Crazy Reindeer. The meals in both places were delicious & all of us really enjoyed them! They were about 25-30 euros for a main meal. Beer tended to be about 4.50 euros & wine about 6 euros.

One night (after we'd done the husky rides) we decided to stay in & cook our own meal. We went to the Levi Market (supermarket literally over the road) and stocked up on food & alcohol. We eneded up having a really good night - playing twister & card games! The chalet had a cosy atmosphere perfect for staying in! Nice dining table for the 6 of us aswell!

For lunch we ate out everyday bar one. First few days at Cantina. It served things like nachos, burgers (proper not processed meat)!, etc for around 15 euros - so not particuarly cheap. But you could get a bowl of fries for 3 euros or a starter for about 8 euros.

We also ate at the Horizont restauant for lunch a couple of imes. At the top of the main slope - this did lovely thin pizzas for about 10 euros.

We went to a few bars whilst we were there - Hullu Poro (by the crazy reindeer hotel), Panimo (quite a locals pub, near Levi Market), Cantina (opposite the front slopes). All were good & the prices for alcohol were roughly the same as mentioned above.

Overall we had a fantastic time in Levi & the Levilehto Chalets definitely played a big part in us enjoing it so much!

This review is the subjective opinion of a TripAdvisor member and not of TripAdvisor LLC.
tutttifrutti
rotherham
5448
Reviewed 16 January 2008
must do holiday even if you have no kids

Where do we start the Levilheto Apartments are fantastic the sauna and log fire are brill.Our daughter is 13 and this is the first time that she has seen what she calls "proper snow".The apartments are across the road from the supermarket and the sledge that you use for getting the logs for the fire is great for taking to the shop to drag your shopping back we didn,t find the supermarket expensive at all and the choice is lot more than we expected to find.Eating out can be expensive but it does depend on where you go we found a nice little bistro we nipped to near the bottom of the slopes the coffees and pastries are lovely.In Levi itself there are only two cash point machines at the Levitunturi spa hotel you can also only change money at any of the hotels around the resort allthough they do charge you commission.We went for christmas and we decided that it would be nice to go another time of the year so we are going back in Feb 2009.The weather was cold but if you have got good warm clothing you will be fine its not the same type of cold damp weather you get hear in England.We went to the Santa Park for a visit and basically it is a right rip off once you have paid to get in and transport (£90 for two adults and one child) you still have to pay for extras when you get in and in the cafe it costs 10 euros for a plate of chips.My husband and daughter went on a snowmobile trip which cost 110 euros and they loved it as they went to were the husky puppies and baby reindeers were they got hot drinks and gingerbread cookies to warm them up before they set off back they were gone for about 3 hours in total and all the thermal suits,boots and gloves were provided.We went with Inghams and everything was great and they came to visit us twice in the apartment even though we were never in they left notes on the door .My only complaint was that even though we had pre-booked our excursions that we wanted to go on you still had to go to the welcome meeting and queue with all the people who were trying to book their trips just to confirm the days and times you wanted to go and this took about two hours b ut other than that the holiday was fantastic and my husband and daughter have announced that they never want to go on a hot hoiday again. LAPLAND REALLY IS THE MOST MAGICAL PLACE IN THE WORLD

This review is the subjective opinion of a TripAdvisor member and not of TripAdvisor LLC.
View more reviews
PreviousNext
1…121314…19