eDreams
Destinia.com
CheapTickets
View all 10 deals
Prices are the average nightly price provided by our partners and may not include all taxes and fees. Taxes and fees that are shown are estimates only. Please see our partners for more details.
lucia177188
11

This whole hotel is very beautiful and the rooms are always clean, the staff is very friendly and helpful, also the food is delicious and bars are always open. There is a beautiful beach and a clean pool with plenty of sunbeds available, so i highly recommend this hotel.

Trip type: Traveled with family
See all 1,362 reviews
Nearby Hotels 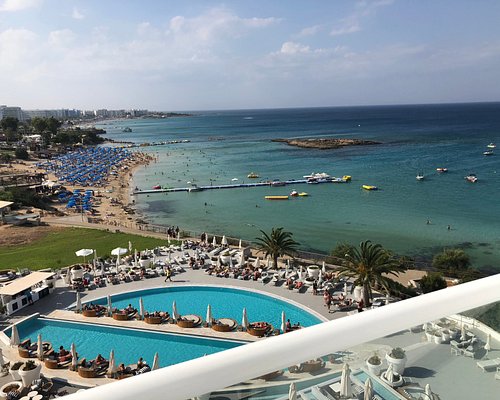 Top Rated
All Inclusive
The King Jason Protaras
US$301
Tripadvisor
View deal
Free cancellation
Pay up to 12X
Travelocity
Orbitz.com
Booking.com
View all 11 deals from US$301
1,253 reviews
0.9 km from Vrissiana Beach
We compared the lowest prices from 11 websites 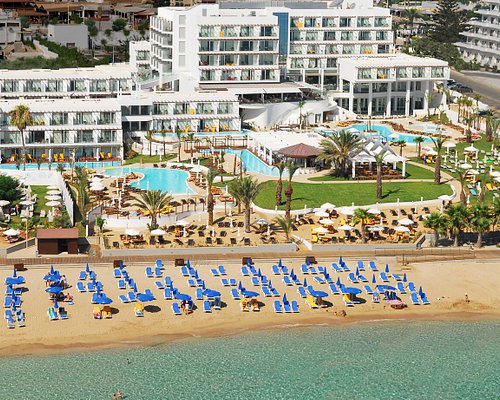 Expedia.com
View deal
Free cancellation
Pay up to 12X
Tripadvisor
US$238
Travelocity
Priceline
US$280
View all 15 deals from US$238
1,682 reviews
0.1 km from Vrissiana Beach
We compared the lowest prices from 15 websites 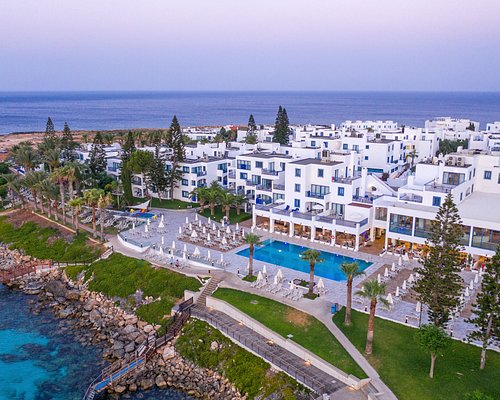 Expedia.com
View deal
Travelocity
ZenHotels.com
US$150
Trip.com
US$279
View all 17 deals from US$150
1,655 reviews
2.0 km from Vrissiana Beach
We compared the lowest prices from 17 websites
Golden Coast Beach Hotel

I would avoid this hotel if possible. The lack of service is farcical and there are much better hotels in the area for a similar price.

- Location is great, directly on the beach and in the centre of town.
- Some staff are very helpful. The beverage manager is great and goes out of his way to make quality drinks and give good service.
- The public areas of the hotel are clean and kept to a good standard.

Now for the bad:

- The public areas have been revamped to a poor standard and lack personality. The sofas look sad and there’s very little in a big space, making it seem sterile. The corridors going to the rooms have almost no lighting and are always dark & dingy. They look very run down and contain dumped old furniture.
- The room is basic but functional. Bed is acceptably comfortable. However, don’t expect a stocked minibar (only soft drinks on arrival). The rooms are also incredibly noisy from nearby bars and from the corridors. Don’t expect a view, you’re surrounded by carpark. There’s also some very strange features; like a mirror on the ceiling..
- Air con in the rooms is just about adequate but at times didn’t cool the room as much as we would have liked.
- The hotel has some strange policies, such as only being able to change beach towels once every 2 days.
- Sunbeds on the beach are chargeable. The ones by the pool are a mixture of broken but more comfortable loungers with mattresses, or horribly uncomfortable plastic ones. There’s also nowhere near enough for the size of the hotel and they can be hard to come across.
- All inclusive drinks are 10am- midnight. The wine is almost undrinkable (the red is undrinkable). No sparkling wine/ Prosecco. Quality of most drinks is poor and some staff are reluctant to make them. The head barman, however, is very accommodating, helpful and makes much better drinks.
- The hotel website advertises 4 bars and 2 restaurants (one being an a la carte Mexican), which is false. There’s a beach bar until 6pm and the main bar until midnight. There’s one buffet restaurant. I found a leaflet stating that the all inclusive package includes one lunch and one dinner at a la carte’s in the area. The reception staff seemed livid that I found this and said this was not the case. They agreed to make reservations (at the hotel next door). The dinner was booked but when we arrived for the lunch there was no record of the booking. The staff were not happy about me finding the leaflet and seemed more interested in identifying how I did so than booking what we asked for.
- The food at the buffet was repetitive and bland. Expect the same lunch every day and very similar dinners. The salads are not covered and there were flies on them.
- Service on the whole was very poor. Reception represented something from faulty towers, where nobody seemed to be able to help without a manager present. They couldn’t book a Covid test for me, they messed up reservations, some didn’t speak English. It got the point of actually being funny.
- Cleaning in the rooms was below expectations. Our bed linen wasn’t changed at all during a week stay (I know as there was a stain). Towels had marks on them and the standard was more a general tidy than an actual clean.
- The lifeguards would regularly be on their phones rather than watching the pool.
- The most concerning part for me was witnessing one of the barman not wash their hands after visiting the toilet. He eventually came back and did so, only because I stared at him. I very much doubt he would have otherwise. The bar staff handle garnishes without gloves..

A lot of the above I intended on complaining about. However, due to the continual incompetence I realised that this would probably be a waste of time. The last few days I didn’t see the reception manager who seemed to be the only one who resolved issues.

If you want a good holiday, I’d suggest booking some of the better hotels which are going for similar prices.

This review is the subjective opinion of a Tripadvisor member and not of TripAdvisor LLC.
Nicnoc67
Littleport, United Kingdom
21
Reviewed 16 November 2020 via mobile
Amazing staff

Got moved to this hotel as one i booked was closed. Could not fault it and the staff were amazing, couldn't do enough for you. Food good variety every time even on fish night which I am allergic too. Got moved next door to constantinos the great for last week as vrissiana closing a couple of days before I was due to go home. But continued to go vrissiana as quality of food and staff much better. Would definitely visit again

This review is the subjective opinion of a Tripadvisor member and not of TripAdvisor LLC.
595simonw
Surbiton, United Kingdom
1
Reviewed 20 October 2020
great welcome and lovely hotel

We were due to stay in another hotel - but our booking was changed. Check in and welcome from staff was really courteous and friendly. We had lost a few nights from our booking as we did not get covid test on time - the hotel offered to make up for lost meals - which we appreciated. Rooms clean, large, bright and airy. Pool and beach front are beautiful - plenty of sunbeds available. Would be nice if some areas poolside/restaurant made non-smoking - but this is no big deal. We were on half board and enjoyed the range and quality of the food; restaurant waiters very friendly and helful.

This review is the subjective opinion of a Tripadvisor member and not of TripAdvisor LLC.
249leannep
12
Reviewed 17 October 2020
Amazing holiday made even better by an amazing hotel full of fantastic staff...will definitely be back!

We stayed for 14 nights all inclusive at the Vrissiana Beach Hotel (Sep/Oct 2020) & couldn't fault a thing.

On arrival we were given room 321 which was very tastefully decorated & furnished with a good side sea view room as promised on our booking with Jet2Holidays. However after our 6th night we received a call from Reception asking us to pop & see the Front Office Manager Savvoulla, as she wanted to upgrade us to a front sea view room. We moved to room 102 the next day for the remaining 8 nights of our stay and it was fantastic with a huge corner terrace/balcony & amazing views over the pool & sea (thank you so much Savvoulla). Both rooms were equipped with a safe, mini fridge & air con all at no extra cost.

The hotel itself is fantastically placed on the beach front with only a walkway to cross and you're there & in the centre of the strip for nightlife. Inside it was immaculately clean with some of the best measures in place to comply with Covid-19 regulations including hand sanitiser in all communal areas/bars, staff wearing masks & use of disposable gloves in the restaurant & on the outdoor all inclusive snack bar. The pool & pool bar were as well kept as the inside of the hotel with plenty of available sun loungers. Towels were available from the Hotel Spa at no cost & could be changed as required - great service!

Food was AMAZING. Always plenty of choice with the chefs producing some delicious meats & meaty dishes & we regularly asked the waiting staff to give our compliments to the chefs - compliments that were more than deserved. The restaurant staff were great, nothing too much trouble & always efficient bringing drinks & clearing plates. Although Aris exceeded all with his absolute charm & friendliness - a credit to the Vrissiana.

All inclusive drinks included a great range of beers, wines, spirits & cocktails served most evenings by the charismatic Matiz who, while borrowed from a neighbouring Tsokkos hotel, provided a great service for nights in at the hotel.

All in all we had a thoroughly enjoyable stay at the Vrissiana and wouldn't hesitate to recommend the hotel to anyone & most definitely stay there again ourselves.

Thank you all of you for our amazing stay & Savvoulla, we hope your flowers stayed fresh and as beautiful as when we gave you them - you have a great hotel, running fantastically & you totally deserved them :D

This review is the subjective opinion of a Tripadvisor member and not of TripAdvisor LLC.
lauraiK4658BC
32
Reviewed 12 October 2020
Perfect

We had our hotel changed to the vrissiana and I must say it was amazing! The hotel was spotlessly clean the staff were really lovely and helpful, we had complimentary drinks in our fridge upping our arrival and fresh towels everyday! The bars were always open and had no problems getting beds at the pool or beach.

This review is the subjective opinion of a Tripadvisor member and not of TripAdvisor LLC.
View more reviews
PreviousNext
123…
<script type='text/javascript' crossorigi