US$97
View deal
Free cancellation until 11/12/21
Hotels.comUS$97
PricelineUS$91
FindHotelUS$91
View all 17 deals
Prices are the average nightly price provided by our partners and may not include all taxes and fees. Taxes and fees that are shown are estimates only. Please see our partners for more details.
SnowGirl52
2

Personable , accommodating reception staff. Welcoming. Exceptionally clean property. Nicely appointed. Great place for a quiet evening before flying out from Mitchell Field in the morning. Nice to have extended parking and an early morning airport shuttle. Very pleasant and courteous shuttle drivers. Next time I fly in late I’ll have to stay another night, as it was wonderful.More

Show less
Room tip: If you fly in on a late flight, go ahead and stay at this property for the night before driving home. It’s a great place to unwind.
Trip type: Traveled solo

Dear SnowGirl52,
We greatly appreciate you taking the time to leave a review. Your comments have been shared with the staff to ensure we continue to deliver experiences like yours. We look forward to welcoming you again soon!

Report response as inappropriateThank you. We appreciate your input.
This response is the subjective opinion of the management representative and not of TripAdvisor LLC.
See all 247 reviews
Nearby Hotels 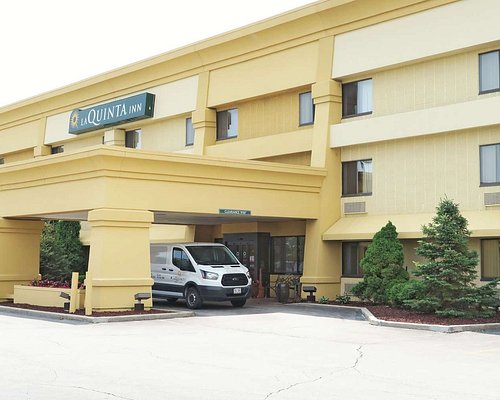 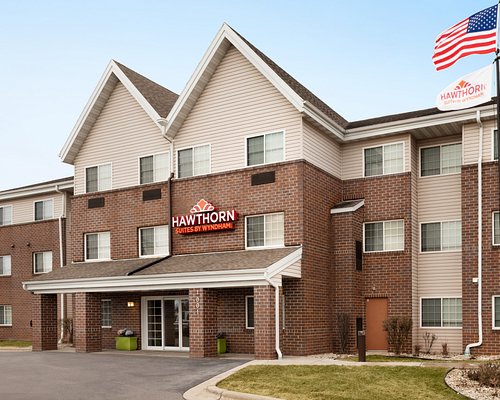 Hotels.com
View deal
Expedia.com
FindHotel
US$148
eDreams
US$194
View all 17 deals from US$148
37 reviews
3.2 km from Fairfield Inn & Suites by Marriott Milwaukee Airport

We booked this hotel for a Park and Ride trip at the end of March. We had a ride scheduled for 5 am so we were to miss breakfast. However, coffee was available for carry out and the desk clerk gave us a yogurt, muffin and fruit to take with us! There were two things that could improve and the reason I did not give them a 5 star rating The first was the wake up call, you set it yourself. I set it correctly, but it was 10 minutes late! Also the ride back from the airport to the hotel for our car retrieval was unsatisfactory. The driver, Eddie, was very rude and made us wait till the third trip before he picked us up. He said we did not call him and was there to pick up a party of 7 which did not show till his second trip. I kept telling him I had called the hotel and they said he would be right there. Apparently this van picks up guests from more than 1 hotel and they give their customers a number to call him directly. Our hotel calls the driver directly for pickup. Apparently, "Eddie", did not abide by this method.

Room tip: We picked ground floor so we would not have to wait for the elevator in the morning.
Ask Sunworshiper52 about Fairfield Inn & Suites by Marriott Milwaukee Airport
Thank Sunworshiper52

Dear Sunworshiper52,
Thank you very much for taking the time to leave a review. We are delighted to hear you had a wonderful stay on property and sincerely apologize for the troubles encountered during your return to the hotel from your trip. This is certainly not the level of hospitality we strive to meet and will certainly use this as a teachable moment. We hope to welcome you again for an ever better experience the next time you travel.

Report response as inappropriateThank you. We appreciate your input.
This response is the subjective opinion of the management representative and not of TripAdvisor LLC.
jpnjo
Wisconsin Rapids, Wisconsin
209101
Reviewed 9 April 2021
Excellent customer service

Recent stay prior to leaving for vacation. Check in was great, very helpful and courteous. Place was very clean. Will definitely stay again. Rob the shuttle driver was great when we arrived, he took us to local restuarant and picked us back up.
MJ picked us up at airport and was also great. Shuttle service was very prompt and efficient.

Dear jpnjo,
Thank you for taking time to leave a review. Your comments have been shared with the staff and we hope to welcome you again soon!

Report response as inappropriateThank you. We appreciate your input.
This response is the subjective opinion of the management representative and not of TripAdvisor LLC.
CIndy E
Sturgeon Bay, Wisconsin
226
Reviewed 2 April 2021
Horrible shuttle service

The Inn itself wasn't bad. They didn't have the staff on the same page when it came to the self serve breakfast. One of the staff said we could help ourselves to the juices and another one said only bottled water. We stayed on our way down for our vacation and then the return night. The biggest issue which I would have given 0 rating. The shuttle to the airport was fine. The issue was on the way back. It was mid-night when were ready to be picked up. I did as the man instructed to give him a call when we had our luggage in hand. I was told it would be a couple on minutes. He never asked for names so he had no idea who he was supposed to pick up. He was so rude and screamed that he was going to leave us at the airport in front of my terrified grandchildren. He had 2 people in his shuttle and said there wasn't enough room for our family of 10. Then miraculously there was room for us. He was absolutely psycho. We have been traveling for many year using the shuttle services through the motels we stayed in an have never run into someone like this.

Dear Cindy E,
Thank you very much for your feedback. On behalf of the hotel, I sincerely apologize for the service received upon your return to Milwaukee. That is certainly not the standard we hold ourselves to and the issue was address immediately in-house. We hope you had a wonderful trip and hope for the chance to better serve you the next time you travel.

Report response as inappropriateThank you. We appreciate your input.
This response is the subjective opinion of the management representative and not of TripAdvisor LLC.
Mrs_Timmy_2005
Sturgeon Bay, Wisconsin
926
Reviewed 16 March 2021
Horrible Airport Shuttle Service

Do not recommend this hotel!!! The pool is extremely small. Due to COVID the breakfast is very limited with grab and go items (out of items on a Sunday and told Sunday’s are busy and they usually run out; sad since they’re all prepackaged items that last for a long time) that do not even include pieces of fresh fruit like oranges or bananas. The shuttle service was the worst I have ever experienced. The driver threatened to leave our entire group at the airport and the way he was yelling he scared my 11 year old. You are supposed to call the shuttle upon arriving to the airport AFTER you have all of your luggage. We were the second group to call and he almost didn’t take us back until the third shuttle. He apparently took a shuttle full of people who hadn’t even called. He also told us the shuttle could only hold 10 people the first time and when he came back the second time it could magically hold 12. I have included a photo of all of the hotels this shuttle services and we will never stay at any of these again. Back to the Best Western Plus where we have never had an issue.

I sincerely apologize for the lack of hospitality received during your recent stay with us. Covid has caused many changes to procedures which we continue to reassess. The issues reported have been discussed with the staff to prevent such incidents from occurring again. Again, thank you for staying with us and enjoy your travels.

Report response as inappropriateThank you. We appreciate your input.
This response is the subjective opinion of the management representative and not of TripAdvisor LLC.
Amy B
1920
Reviewed 22 April 2020
Great Stay

We booked a park/sleep/fly room for a flight out of MKE. We enjoyed our stay. The hotel is in a nice location that is close to the airport. The room was clean, quiet and comfortable. The shuttle service to/from the airport was very nice. Be sure to get a card for the shuttle service before you fly out as you do not call the hotel directly for pick-up on your return flight. They also have a continental breakfast. We will definitely stay here again!

Thank you very much for taking time to leave a review. We are happy to hear you were comfortable at our property and were able to enjoy our amenities. We hope to see you again the next time you travel.