$55
View deal
FindHotel$46
StayForLong
ZenHotels.com
View all 8 deals
Prices are the average nightly price provided by our partners and may not include all taxes and fees. Taxes and fees that are shown are estimates only. Please see our partners for more details.
donferric24
Pasig, Philippines
2316

Review of By the Sea Resort Hotel
Reviewed February 26, 2020 via mobile

It was a family room accomodation. Beachfront location, clean and huge room with 1 queen size bed, 1double bed on the floor ( no bed frame). With mini ref, no coffee/tea maker, no oven.
With 4 complimentary bottled water, toiletries and 2 free breakfast. Toilet with water heater and bidet but no cleaning rags in front door and toilet. Room price a bit expensive for me coz its lacking some items for a hotel room.
They have restaurant but a bit pricey, though food was good. There are many eateries outside the establishment, 7-11 and Divimart supermarket are nearby the location.
Swimming pool-small and dirty. We opted to swim in the beach, which is clean and clear.
Hotel and restaurant staff- all accomodating.
Clean surroundings, safe and very peaceful at night.More

Expedia.com
View deal
Free cancellation
Pay up to 12X
Priceline
$70
Agoda.com
$58
Hurb
$78
View all 16 deals from $58
43 reviews
2.7 km from By the Sea Resort Hotel
We compared the lowest prices from 16 websites 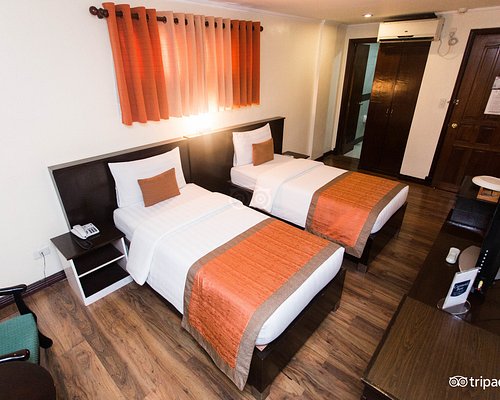 Expedia.com
View deal
Free cancellation
Pay up to 12X
Priceline
$31
FindHotel
$26
Trip.com
$36
View all 14 deals from $26
87 reviews
0.7 km from By the Sea Resort Hotel
We compared the lowest prices from 14 websites 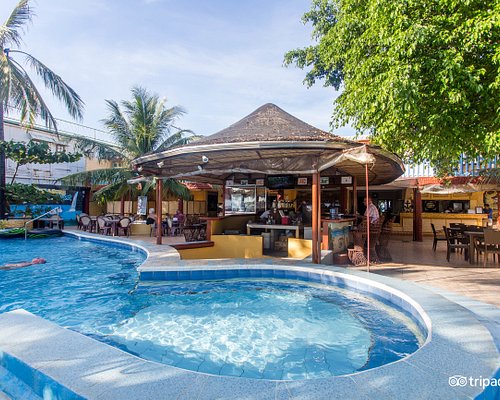 The resort have improved from previous years because of the new building and rooms are very promising. The room rate is somehow average and the resto meal prices are reasonable. The shore was clean and neat. There is a good space for car parking.

There are still some renovation ongoing and i hope they continue to improve especially their service in the future.

Here are some of the few things we observed and i hope they improve more.
1. Toiletries is somehow lacking.
2. No floor mat or rag which cause toilet or room to flood when wet.
3. No kettle for hot water.
4. No complimentary coffee or tea.
5. Majority of the towels are dated. I hope they have matresses compare to the thin linen.
6. No elevator. It will be a burden for old peeps if you are located at the 3rd floor.
7. No rack to hang wet clothes or at least a toilet wire hanger.
8. Resto breakfast is limited
9. Food serving need to improve.
10. No visible life guard.
11. No one offer or even assisted for our luggages when we arrived and checked out. I hope service crew smile sometimes.

Overall, the hotel at their current rate is decent and fair. We will continue to come to this place because the location is good and accessible to many options. Im hoping they made some adjustment because they are just few improvements away to deserve a five point rating.

This review is the subjective opinion of a Tripadvisor member and not of TripAdvisor LLC.
jonahphillipb
1
Reviewed January 4, 2020
Book at your own risk.

Would quickly have the understanding on the difference between being greedy and having a business. The owner would obviously care less about your experience since you're already checked in (oooops! Too late.) paid for a room enough for 4 persons, ended up with a double sized bed along with a single floor mattress; i had to basically accommodate my family first and ended up sleeping in the car due to shortage. To add, i had to prep the floor mattress by myself since the old guy who worked there just gave and left me with it. Breakfast came, was on a good mood since bfast was included but the place wont disappoint with disappointments, (lol), had to sit, wait, and be ignored for over an hour. Whats more frustrating and sad is, i got skipped as i see new visitors coming in, and not to rain down on guests esp our good foreign friends but, its just sad as filipinos have this mentality of ignoring their own once they see them foreigners coming. Got this negative profiling attitude. Point is, beach area is not that well taken care of, room is not worth it, food is edible at least, and place is terribly understaffed. Their staff somehow managed to compensate on all the inadequacies of the resort. Sad; im not going in for the third time.

This review is the subjective opinion of a Tripadvisor member and not of TripAdvisor LLC.
ennvy
21
Reviewed October 14, 2019
Nice hotel

cons.
1. beach front is clean but neighboring resorts and residences is dirty
2. if its low tide u can reach an area of the beach that has rocks and metal that can injure u
3. the pool has murky water dont know if they clean it regularly
4. check the prices
5. it can get noisy at night due to loud bar music from other establishment and the highway

Trip type: Traveled as a couple
Ask ennvy about By the Sea Resort Hotel
Thank ennvy

Thank you for taking the time to give us a great review. We will also take note of your comments to help us serve better.

Report response as inappropriateThank you. We appreciate your input.
This response is the subjective opinion of the management representative and not of TripAdvisor LLC.
4thdecree
1
Reviewed August 11, 2019
Terrible experience

We had our wedding day in this hotel in May 2019. What could I say to those who are considering this venue? We signed the contract in advance (in more than 10 months before the event) for the total package and paid more than a quarter million in peso. So, what did we get on our special day?

Despite that the manager was reminded in advance that we need a judge, PRIEST (minister) arrived instead of the judge on the wedding day. As a result, we were not even sure if the wedding will take place or not. Manager fixed her mistake and found a judge after few hours, but needless to say what stress we had to experience.
Wedding coordinator (same manager) was not there to help with the wedding coordination (she was too busy fixing the issue with the judge probably?). As the result, the bride and guests didn’t know what to do, where to go, pictorial was hectic, the bride was not aware that ceremony has already started and she was almost late, rings were nearly lost. That only added to the stress and tiredness.
Ceremony itself was darkened by the lack of proper technical means. Music for the ceremony was played via the CELL PHONE… to make it louder they simply put a microphone next to it. Microphones themselves were barely working. So, the judge had to start without the mic and the most of the guests were not able to hear the speech of the judge. Fortunately, they were able to fix microphones before we said our vows, so, at least, guests could hear “I do” properly.
Wedding MC (same manager again) did not deliver. Wedding reception had a proper opening, but after we cut the wedding cake, MC disappeared and never came back. There was no proper closure for the reception. Our guests were left wandering – if it is the end already or not yet? They forgot to add special effects (bubbles) even it was metioned in the contract.
Because of the mistake with the judge, marriage certificate was released much later, that affected our honeymoon, as we had to go back to Olongopo to fix it. Later we also noticed that because of the all the hurry and rushing they made a mistake in the wedding certificate that needs a correction.
If we talk about food, in my opinion the quality below average. Spoon and forks needs urgent replacement, as they look pretty old. General attitude of the personnel is not welcoming, everything is done in a reluctant manner (with a few exceptions). That also includes managers who were not able to communicate properly. My emails were ignored or replied only after 2-3 weeks. Some waiters were extremely rude to our guests.
As a conclusion. The wedding was not a complete fail, BUT it was very-very near to it. I would not recommend anyone to experience this. If you like the locations of this venue, please make sure you have your own food, your own MC, your own coordinator. Do not rely on this hotel, they will only remember when its time to pay the bill.

Ask 4thdecree about By the Sea Resort Hotel
Thank 4thdecree

This review is the subjective opinion of a Tripadvisor member and not of TripAdvisor LLC.
jhamesacson
Manila, Philippines
1
Reviewed July 29, 2019
FOOD CONCERN

All the way from Manila.

FOOD CONCERN: We stayed for 3 days but the food tasted the same, served the same of the times we feel like they are just re-heating the food they're serving to us (mentioning the Sweet and sour fish/pork), the rice is not very good in short low quality type of rice, and even the vegetables makes us feel like they treating us like a swine to just eat that way because they're cutting it in a very big chunks. And from the bartenders don't know the exact or proper srrving and mixes of cocktais, some of us ondering the same drinks at different times but the alcohol level, glass varies in volume.
FOOD & DRINKS RATE: VERY POOR

ROOMS AND ACCOMODATION: The rooms posted online are exagerrated, way too far from it was in personal. Not properly maintained, bed is hard as fk, bugs are seen in the cabinet, no complimentary water inside the rooms, no available food in the fridge, toilet flush is not properly working sometimes, shower handles is broken, no place for clothes drying (not suitable for long stay), and they give 2 blankets for a room that is good for 4 persons.
ROOMS AND ACCOMODATION RATE: POOR

OVER ALL: Kind of Hotel that you will book for by looking in websites but never to return because of real experience and a self shame for recommendations, I hope it gets better especially low price and high ends hotels are already rising beside their premises.