$19
$14
View deal
Free cancellation until 02/03/22
Booking.com$18
Travelocity$19
Trip.com$18
View all 12 deals
Prices are the average nightly price provided by our partners and may not include all taxes and fees. Taxes and fees that are shown are estimates only. Please see our partners for more details.
susanaisalazar
Arlington, Virginia
2864

The hotel is a Love motel. The whole area around it is for hookers and pot heads. We stayed in PJ Inn because we had a flight to catch out of Angeles City. The hotel is really near the airport and should be about a 20min drive max! The room is clean, big and had a separate shower (which is rare in Asia). There is a pool, restaurant, and a computer in the hotel so you don't have to leave the hotel. The hotel is good for layovers in Angeles City......but then again, why else would you come here?

See all 35 reviews
Nearby Hotels 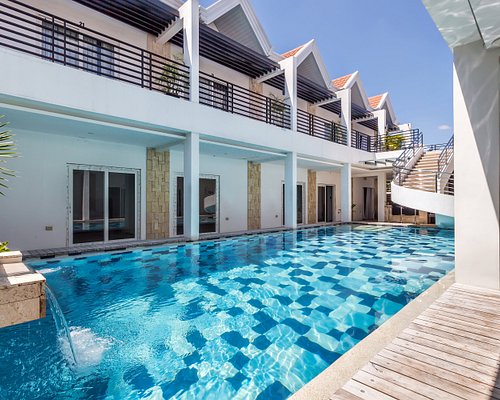 Taking safety measures
We compared the lowest prices from 12 websites

We stayed at PJ Inn Hotel for one night before flying to Bangkok. It was a bit expensive for us- 1000 PHP, most expensive place we stayed in the Philippines. But it seemed the best option for the price. We arrived, and were brought to a Standard double room with air-con and bathroom. The shower was separate from the toilet, which is rare in cheaper places in Asia. They provided us some basic amenities, toothbrushes and soap.

The toilet didn't work very well. After going to the bathroom it took about 5+ minutes to flush, and eventually we just stopped using it. I hope this was only in the room we stayed in.

Staff was nice, there was a Korean restaurant next door which is open 24 hours.

We took their minibus to the airport the next day which cost 300 PHP per person. This was extremely expensive for our budget but they convinced us it was the only quick way to get to the airport. After spending hours on jeepneys going to and from airports in Cebu, we decided to splurge and get the minibus.

The neighborhood is a bit strange, but that's just Angeles City. We saw many men over 60 with girls under 20, it's not hard to imagine what was happening there.

Overall, decent place to stay for a night.

This review is the subjective opinion of a Tripadvisor member and not of TripAdvisor LLC.
NortiusMaximus
Melbourne, Australia
4929
Reviewed March 5, 2012
Not a bad place to stay.

Room is a good size. Although the bathroom could be bigger.
Fridge is respectable size.
Safe is small. Couldn't fit my 10" tablet inside.
Bed is comfy!
Limited selection of tv programs, and alot of interference made watching tv annoying.
Location is ok, not problem walking down the road in the wee hours.
Close to fields ave.
Sara provides a great massage onsite. Highly recommend.
Has Korean restaurant attached.
Swimming pool is suitable size, although bring goggles or don't open your eyes underwater.

This review is the subjective opinion of a Tripadvisor member and not of TripAdvisor LLC.
Shariffable
1925
Reviewed December 21, 2011
Amused

As a first experience in Angeles city, I am was truly impressed by the customer service that this hotel is willing to give. Not being a 5star hotel, the hotel somehow is able to maintain their standards. Rooms are fine, clean and practical. The cost is practical for budget. Location is good I reckon, not too far away from fields ave where the party is yet far enough not to be disturbed.

This review is the subjective opinion of a Tripadvisor member and not of TripAdvisor LLC.
markallanwainwright
Upminster, United Kingdom
7443
Reviewed May 21, 2011
Well worth it

After reading reviews here I opted to spend 3 nights in Deluxe room. Very friendly, helpful staff, very clean rooms, good shower, safety deposit box in room. Read about people unsure about walking along road at night...this is not an issue, no problems at all, 5 min walk from Field Ave. So it is off the beaten track which means it is quiet at night. Down side was on 4 floor could not get internet - had to go to reception area, poor TV reception and limited channels. For sure I would stay there again.

This review is the subjective opinion of a Tripadvisor member and not of TripAdvisor LLC.
cheshire2000
Coulsdon, UK
2517
Reviewed March 14, 2010
Great value - Service exceptional!

My requirement was a budget hotel with a pool. I chose the Executive room which was spacious and clean. One of my concerns was security, each room has a safe and the reception checked IDs of visitors. My only slight concern was the location at night. I took a trike after dark rrather than walk. Perhaps I was just over cautious. The hotel has a courtesy minibus which does airport runs to Clark and to the local golf courses. I expect it would take you elsewhere, but I didnt ask. The staff were very welcoming and helpful. There is a Korean restaurant attached. Close to SM mall.