Beachside Resort
Lowest prices for your stay
Lock in the lowest price from these sites
US$356
US$285
View deal
Expedia.comUS$356
PricelineUS$285
TripadvisorUS$285
eDreamsUS$285
Hotels.comUS$356
TravelocityUS$356
View all 16 deals
Prices are the average nightly price provided by our partners and may not include all taxes and fees. Taxes and fees that are shown are estimates only. Please see our partners for more details.
9998bogeyblues
31

I am a mother of three boys. After a long drive down, the friendly man who greeted me at the desk could not be more helpful. He checked us in fast and showed up to our suite. I couldn't believe how close to the beach we were! I found it to be very clean and reasonably priced. The beds were extremely comfy. They had my children out in minutes! The WiFi was good. My children loved the pool and it was hard to keep them out of it. Although New Jersey has lifted the law against masks, the employees all kept theirs on and continued to take extra precautions. I can't wait to return- and neither can my kids. Perfect location, perfect service, perfect vacation!More 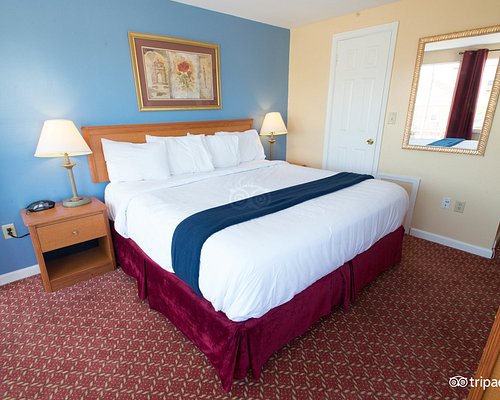 Top Rated
Sponsored
The Sand Box Motel
US$224
US$177
Booking.com
View deal
Reserve now, pay at stay
Expedia.com
US$224
Priceline
US$177
Tripadvisor
US$177
View all 13 deals from US$177
556 reviews
We compared the lowest prices from 13 websites 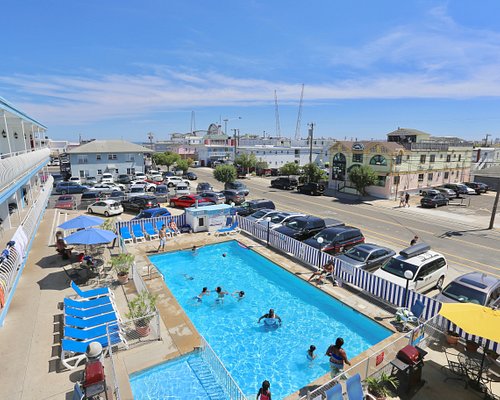 Quebec Motel By-The-Sea
US$419
Tripadvisor
View deal
Expedia.com
Booking.com
US$419
Hotels.com
View all 15 deals from US$419
542 reviews
0.2 km from Beachside Resort
We compared the lowest prices from 15 websites 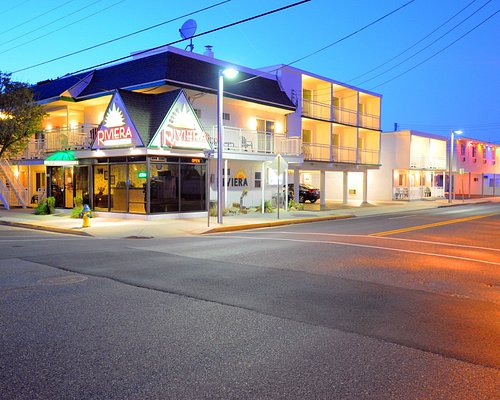 Where do I begin. I didn’t want to leave a bad review, so I contact the motel in order to try to rectify the situation, the owner accused me of trying to “blackmail” them. Let me be clear, I am not blackmailing someone when I am being honest. If you read one review, I encourage you to read mine. I am fairly certain the other reviews of this property are fake. If you look up this hotel on trip advisor you get a WHOLE different story. This is the worst, most shady motel I have ever been to. There were bodily fluids on the bed, which was the first thing I noticed when I walked in. The next thing was the smell. The place smelled overwhelmingly of chemicals. Normally the smell of cleaning products will dissipate, but the odor seeped into all of my belongings. I had to wash everything when I got home. The smell of chemicals never went away and it made my eyes burn. There were people outside my door screaming until late at night. It was scary and I wasn’t able to sleep. I told the hotel this and they told me I was lying, even though I have video evidence of it. The walls are paper thin and I could hear every word of the conversation of the people next to me. There were other units in the building that had smoke detectors beeping all night because they were out of battery. I was not comfortable going to the office to report this because there were men outside my door. I ended up packing my things in the middle of the night and waiting until the sun came out to drive home. I never slept once. This experience was horrific and the worst part was when I went to report this experience to the owner they told me I was lying and that I was blackmailing them for a refund. It is not blackmail when I have video and photos. This place is a scam. If you have children DO NOT stay here. I would never expose kids to this. All I wanted was a refund for the traumatic night I stayed here and the owners were just defensive and told me I was lying.

This review is the subjective opinion of a TripAdvisor member and not of TripAdvisor LLC.
V1300EXstephaniew
1
Reviewed 14 September 2020
Very disappointed

Everything.... (written on booking.com). This was written by the gentleman who checked me out on Monday. He told me he would give 60% off my next stay if I gave him my phone to put in a code for it. It turns out he wrote his own review using my info to write that I liked everything about this hotel. I also did not get the discount. Not that I will need it. The only good thing is that is very close to the Boardwalk
Disliked · This is the real review. Stayed in Junior Suite. There is nothing suite like about it. Mini fridge literally holds up the tv. They didn’t replace a full roll on toilet paper when room was ready. Left only one extra roll for a family of 4. The garbage outside the room was not emptied. Flies and Nats inside the room and outside.Very loud outside late at night. Pool was very dirty. If you need something after the office is closed, don’t bother to call because no one answers.

This review is the subjective opinion of a TripAdvisor member and not of TripAdvisor LLC.
ALA2025
United States
1
Reviewed 25 August 2020 via mobile
THE WORST

This was the absolute WORST motel I have ever stayed in. THE WORST. The motel itself is dirty and rundown with a dirty pool and garbage all over the place. The trash cans alongside the building were overflowing with trash and were not emptied once during my stay. My window view was of an abandoned building with broken windows and squatters inside. The owners of the motel were rude and insisted on cash only. We had 1 roll of toilet paper for 7 of us. Had to ask for more. There were no blankets on any of the beds. Had to ask for those. Gave us 2 towels for 7 people. Had to ask for those also. The room was not cleaned once during our stay. My “JR Suite” consisted of 2 rooms with 3 beds jammed inside which left no room. The so called JR Suite was a complete rip off and we were misled by the amount of space we would actually have. The amount of marijuana that was openly being smoked outside of our room by other guests was nauseating. I had to explain to my young children what that smell was. I also had to explain the “colorful” words that were being screamed outside of our door by the people that were blasting gangster rap. I would rather have slept in the hotel from The Shining.

Trip type: Traveled with family
Ask ALA2025 about Beachside Resort
Thank ALA2025

This review is the subjective opinion of a TripAdvisor member and not of TripAdvisor LLC.
lyndseym725
11
Reviewed 31 July 2020
beachside resort

One of the worst hotels i’ve ever stayed at. it’s dirty. the employees are rude, the service is horrible and the trash outside the rooms are overflowing daily. There’s mice crawling by the trash late at night and there’s tons of flies everywhere due to lack of cleaning and upkeep. They gave us no toilet paper or towels, we had to keep asking for things that should be a given. This hotel is a scam i would highly recommend booking your stay somewhere else.

This review is the subjective opinion of a TripAdvisor member and not of TripAdvisor LLC.
bryancS5645PW
1
Reviewed 15 July 2020
The worst

Horrible. The room I booked wasn't available when I arrived and I had no choice but to accept a different one. When arriving to the smaller room the door was open and the toilet was clogged with ... floating. Another room change ensued, which obviously wasn't cleaned very well given the m&ms crushed on the floor, found when I moved the table to plug into the outlet. Do yourself a favor and go anywhere but here.

This review is the subjective opinion of a TripAdvisor member and not of TripAdvisor LLC.
View more reviews
PreviousNext
12…