White Caps Motel. Thank you for the real beach experience

I enjoyed the motel and pool . Kate and employees were very sweet and tending to all needs. Although cleaning rooms due to covid is cleaned after check out not daily . You need to clean up after yourself. That's easy. . Got to keep employees safe. . I always stayed in that area as a a child So close to everything. The true experience of the old day beach stays. If your uppity your probably in one if those giant condos. I want the experience of old beach days. Pool is so clean and salt water great for your skin. Price is great for those who don't have much but want to give their family a real beach ,boardwalk experience. I have read some bad reviews stating bad things said about owner employees and motel I disagree stronglyMore

Show less
Room tip: Their is pool side and a a side not pool side
See all 68 reviews
Nearby Hotels 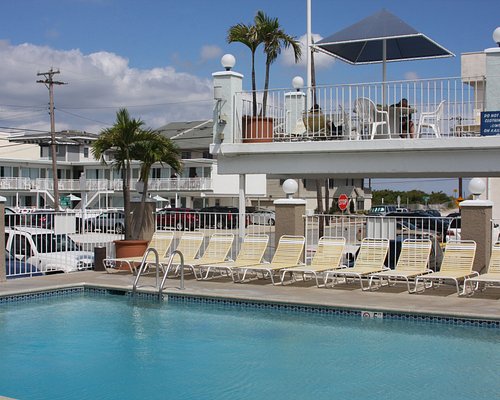 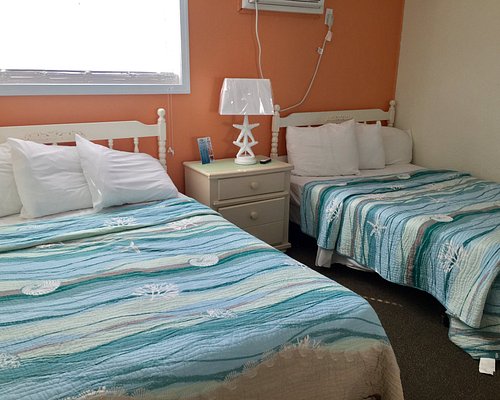 Harbor Light Family Resort
US$241
Booking.com
View deal
Reserve now, pay at stay
Priceline
US$241
Agoda.com
US$241
Tripadvisor
US$241
View all 13 deals from US$241
215 reviews
1.8 km from White Caps Motel
We compared the lowest prices from 13 websites
Alante Oceanfront Motel
US$399

I've stayed in this hotel before. The location is two minutes to. The beach and Sam's pizza. This is not a five star Club Med experience, but what you get is a safe and cozy place to sleep and rest while you enjoy the beach. If you are in Wildwood you should be out exploring all day anyway. The beach just at the end of the street is one of the nicest in the city. I had a full kitchen which is handy when staying more than overnight. Free ice machine, no coins needed just bring a bag. The hotel can be easily reached by phone. They do not have a desk agent 24 hours a day which is common for smaller family owned businesses. This is not a problem because the staff respond quickly. Rooms still in renovation stages. Nice new tiles and floors. The Wawa on New Jersey Ave is a great choice for many kinds of food options. Go to Good Night Irene's bar for good food and many beers. Take your bike if you are there off season it's dreamy. When I left I had to hug Theresa the business manager for making my time have the quiet and zen I needed so much.

This review is the subjective opinion of a TripAdvisor member and not of TripAdvisor LLC.
cherylg203
Runnemede, New Jersey
3122
Reviewed 14 October 2019 via mobile
Awful experience

The office was closed with a posted sign to call the motel number when we tried checking in for a previously booked stay. No answer. Voice mail was full. Voice mail said to send text. No response. We waited a half hour at the property before leaving and having to pay to check into another hotel. I got a call an hour and a half later and was told my room was unlocked with the key inside. How would I have know that or what room to go into.
Very unprofessional and I’m waiting for the return of my money.

This review is the subjective opinion of a TripAdvisor member and not of TripAdvisor LLC.
Passenger664863
23
Reviewed 21 August 2019
DO NOT STAY HERE!!!

This has been a trip from hell. By far the worst experence I’ve ever had at any hotel/motel. It all started when we were on our 4 hour drive to wildwood when we received a call from the hotel stating they are overbooked and will need to relocate us to their (sister property) they gave many promises that made us accept this relocation that were not full-filled (2 queen beds, sea view room, private terrace, kitchenette). Upon arriving to the property, we were told there were no queen beds, only double, the private terrace consisted of a shared hallway used to access each guest room. The sea view from the room they stated was only accessible between a hallway corridor between two buildings. When we attempted to contact the front desk, we realized they closed from 10pm-7am. How is that even possible? When we reached out to the white caps motel the following day they stated there’s nothing they can do because we did not reach out the same day. No remorse or apologies extended. I would not recommend this hotel solely due to the lack of service provided in addition to the negative experience myself and I’m sure other guests have incurred.

This review is the subjective opinion of a TripAdvisor member and not of TripAdvisor LLC.
hotelreviewer728
14
Reviewed 11 August 2019
Great location but not worth the agony

Our stay was not the greatest. We had a 2 bedroom suite and as soon as you entered it smelled of mold. There were ants crawling around on the kitchen counter, the stove was rusted and the kitchen blinds were all bent and broken. There was no coffee maker and all of the kitchen table chairs were mismatched and very old looking. The bathroom...only one of the three lights above the mirror worked. When I would make the shower colder it just kept getting hotter, oh and the only liquid hand soap provided was an empty bottle. The toilet paper dispenser was also rusted. The ceiling was rusty and very discolored, the thermostat didn’t have a covering on it. The tv in the main living area didn’t work. It turned on but literally no remote would make it work. When I checked the batteries they were corroded. Lastly, the door had a big gap underneath and on the side and you could see a crazy amount of light coming through it. The only good thing I have to say is that the towels and sheets were clean. Bed not too comfy but it was clean. Would never go back here again.

This review is the subjective opinion of a TripAdvisor member and not of TripAdvisor LLC.
corrado b
Milan, Italy
614
Reviewed 13 August 2018 via mobile
Terrible!

Terrible
Reading booking white caps introduction and watchin photos u can imagine a really different location. Our room is not in the photos , being small with bed close to the wall and without furniture and tv on the back. No shampoo or other services offered in the bathroom just a small soap. no plugs available to charge phones or laptop. Noisy: people talking loudly after midnight and nobody at the reception (24h?). Dirty inside and outside , cars parked everywhere, closing the stair access to 1st floor ( very dangerous) . swimming pool where i’d prefer not to allowe my son to go in. And finally? A cost of 4 star hotel!!! 190 usd for 1 nite? Sorry , not accettable !

Trip type: Traveled as a couple
Ask corrado b about White Caps Motel
14  Thank corrado b

This review is the subjective opinion of a TripAdvisor member and not of TripAdvisor LLC.
View more reviews
PreviousNext
123…
<script type='text