US$95
US$67
View deal
SAVE US$28
Expedia.comUS$71
Hotels.comUS$71
travelup.comUS$95
View all 19 deals
Prices are the average nightly price provided by our partners and may not include all taxes and fees. Taxes and fees that are shown are estimates only. Please see our partners for more details.
linasciutti
San Francisco, California
11

Could hear everything on the bedroom next to mine, even the alarm clock. The bathroom was super small and the bed was making noises. The location is great but didn’t like the rooms. The staff is not friendly.

Review collected in partnership with MGM Resorts International
This business uses tools provided by Tripadvisor (or one of its official Review Collection Partners) to encourage and collect guest reviews, including this one.
See all 25,629 reviews
Nearby Hotels 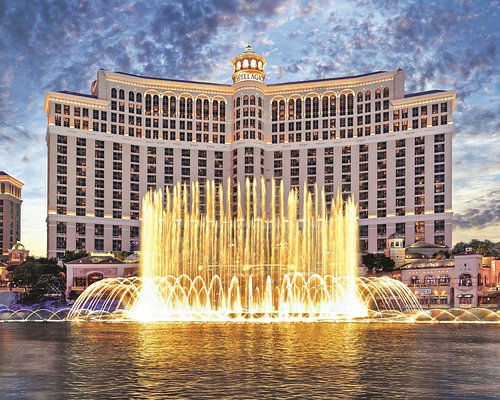 Taking safety measures
We compared the lowest prices from 18 websites
The Cosmopolitan of Las Vegas, Autograph Collection
US$220

Taking safety measures
We compared the lowest prices from 19 websites
Caesars Palace
US$129
US$99
Booking.com
View deal
Free cancellation
Expedia.com
US$99
Hotels.com
US$99
travelup.com
US$129
View all 19 deals from US$99
26,532 reviews
0.6 km from The Mirage Hotel & Casino

Right in the heart of the strip a great location. The room was very clean and the staff cleaned it daily for me as well. The casino was great as well. Hope restaurants open soon would have liked more choices. Only downside was too many kids and that isn't the casinos fault. Great trip can't wait to get back.

Review collected in partnership with MGM Resorts International
This business uses tools provided by Tripadvisor (or one of its official Review Collection Partners) to encourage and collect guest reviews, including this one.
Ask daddiotn about The Mirage Hotel & Casino
1  Thank daddiotn

This review is the subjective opinion of a TripAdvisor member and not of TripAdvisor LLC.
Mikeg0282
11
Reviewed 10 March 2021
Not what it used to be

Mirage is not what it used to be, anymore. The restaurants' staff are a bit rude and the food often comes out lukewarm or even cold. This isn't just one restaurant- it was several. The table dealers seem tired and unfriendly, most likely because they aren't getting ripped out which leads to the next comment. Table games and slots seem tighter than ever- I understand that it's a business, but it all goes so fast. It's almost as if they don't even pretend to give you a chance. The entertainment value is just not worth it anymore. Last but not least, everytime we left to head outside, there were always people smoking marijuana with blatant disregard for others. I don't have a problem with it, but I just don't like having it blown in my face when I'm outside.

It's almost as MGM is just giving up on that location, since it is surrounded by Harrah's properties. Sadly, we will not be going back. 2 stars, because I have been going there for 15 years, so a part of me still loves the place.

Review collected in partnership with MGM Resorts International
This business uses tools provided by Tripadvisor (or one of its official Review Collection Partners) to encourage and collect guest reviews, including this one.
Ask Mikeg0282 about The Mirage Hotel & Casino
1  Thank Mikeg0282

This review is the subjective opinion of a TripAdvisor member and not of TripAdvisor LLC.
TravelingSoccerLoon
Saint Paul, Minnesota
755477
Reviewed 10 March 2021
Great Location on the Strip

Great location on the Strip. I was upgraded to a tower deluxe room which may bias my positive review. Room was comfortable and express elevator to the 24/25th floors was helpful. Easy and efficient check in when arriving on a late Saturday afternoon. Free parking in multistory garage next door. I was able to get a great rate during these Covid times. Not giving it the 5 rating as I'm comparing it to Caesar's where I stayed last October. The suite that I had there also for a great rate was a far superior room.

This review is the subjective opinion of a TripAdvisor member and not of TripAdvisor LLC.
slimsnipersnake
Bismarck, North Dakota
11
Reviewed 10 March 2021
Like the Casino but not the hotel’s beds

I like everything about this casino but the hotel’s beds! I thought the beds were to hard from my comfort. The beds were really firm little too firm for me. I like the location. I like the casino layout.

Review collected in partnership with MGM Resorts International
This business uses tools provided by Tripadvisor (or one of its official Review Collection Partners) to encourage and collect guest reviews, including this one.
Ask slimsnipersnake about The Mirage Hotel & Casino
1  Thank slimsnipersnake

This review is the subjective opinion of a TripAdvisor member and not of TripAdvisor LLC.
C7004WBelenaz
11
Reviewed 10 March 2021
Overcharged for fake charges!!

The hotel was ok, bathroom was dated with peeling caulk and cracked tiles. When we entered the room the kids got excited about the candy that was placed strategically right in front of us. They opened and started eating. Little one opened chips and I grabbed water. Big mistake. Each item is 18 dollars. But oh well, we opened it, we will pay for it. What I did not expect to pay for is the minibar items that we did not eat or drink. On top of 4 items we actually ate, I was charged for 3 more. When examining the minibar noticed that few slots were empty without drinks, but I though they knew how many they have in there. But I am assuming I was charged for the items missing from the fridge even though it was not there when we arrived. Please make sure to give a quick look over and mention any missing items in your minibar to your front desk right away to have a proof that you were not the one who took them. Got bill next day almost 160. NO help from Mirage. Disputing amount with my bank now. Hope to get money back.

Thank you so much for your detailed review and for letting us know about your visit to The Mirage. We would like to apologize for your disappointment with our refreshment center policies regarding storing personal items. We do not permit the storage of personal items in our guestroom mini bars as many of its contents are perishable. Please know that if you wish to have a refrigerator for personal usage during your stay, one may be requested upon the securing of your reservation or with the front desk. We certainly appreciate the chance to host your visit, and will work to better our efforts in the future.

Report response as inappropriateThank you. We appreciate your input.
This response is the subjective opinion of the management representative and not of TripAdvisor LLC.
View more reviews
PreviousNext
1…515253…4272