US$105
US$95
View deal
Free cancellation until 02/07/21
PricelineUS$105
TravelocityUS$95
eDreamsUS$105
View all 15 deals
Prices are the average nightly price provided by our partners and may not include all taxes and fees. Taxes and fees that are shown are estimates only. Please see our partners for more details.
susanfS5488KD
Sherwood, Arkansas
1720

Falls Creek Inn and Suites was much nicer than I expected. We had a two queen renovated room. Great location with a creek running behind it. Close to Silver Dollar City, Hwy 76 and Branson Landing. We will return.More

Glad you enjoyed your stay. Thanks for the kind review!

Report response as inappropriateThank you. We appreciate your input.
This response is the subjective opinion of the management representative and not of TripAdvisor LLC.
See all 367 reviews
Nearby Hotels 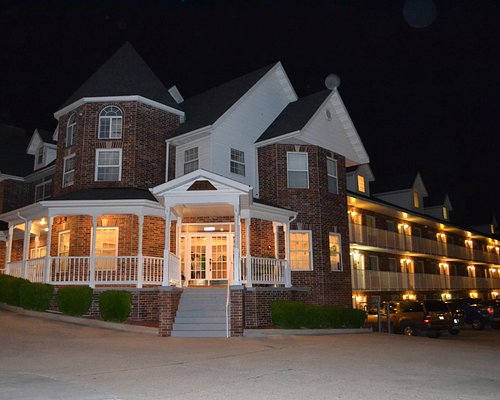 What a dump! Room 130 is just a dump. We booked through tripster, that’s a joke. Cannot get a reply from them to get help getting a different room. Carpet is stained, bed is uncomfortable, walls are paper thin and you can hear everything going on outside. Shower has some kind of filth that I couldn’t get clean. “Luxury Queen Suite” no way!! I am marking this place off our list of never stay again! Lesson learned!!

This review is the subjective opinion of a TripAdvisor member and not of TripAdvisor LLC.
977vernar
Rockford, Illinois
33
Reviewed 14 June 2020 via mobile
Slept in parking lot.....so horrible

We booked this shortly after COVID 19 just started. We called in advance to make sure we could check in at anytime and we were told, “yes”. However, when we got there, well before “unreasonable” check in hours, no one was there to check us in. We made numerous phone calls to Groupon, as that is where we booked our three day stay through. We stayed in the parking lot with a rambunctious four year old waiting for over two hours for a response from someone. Finally, left to burden some family in Springfield Missouri for the night when realized we were being given the run around by all parties. The following day we spoke to Brandi, who said she understood and would speak to Groupon on our behalf for a refund. She said we were to write to management@fallcreekinn.com so we wrote to Groupon and cc’d this email to them. Last week Groupon said they never heard from Brandi. We called two days ago to speak to Sheldon, who had never heard anything from Brandi about the incident and claimed we were only marked as a “no show”. While Groupon just claimed that our story was never verified by Brandi. Ugh!!! We literally could not check in and did not have another 300.00 readily available to spend on another hotel during this unprecedented time, as it was.

This review is the subjective opinion of a TripAdvisor member and not of TripAdvisor LLC.
mrmo2k
Kansas City, Missouri
5
Reviewed 25 May 2020
Inn by the creek

Our experience with Fall Creek Inn, just a stones throw from mid Branson, was wonderful. The property is located next to fall creek, where people can relax to the sounds of the near by water, read a book or just enjoy the quiet. The swimming pool was open and kids from the inn were having a blast. The room was immaculate, very comfortable mattress and such. Brandie helped us out when needed (she's good) and the staff is very friendly and welcoming. We'll have no concerns about staying at this inn again.

This review is the subjective opinion of a TripAdvisor member and not of TripAdvisor LLC.
2Louie
1
Reviewed 25 November 2019
Love the lighting!!

Most rooms I have stayed in seem like caves - one light over a table by the door, maybe one by the TV, a bedside light and then the bathroom lights. The new upgrade has plenty of light everywhere!! There were all the above mentioned lights plus individual reading lights on each bed plus ambient lighting on the backside of the head board.
Room was clean, with plenty of towels. It is located right beside a major road but never heard the traffic. Will stay here again!!

This review is the subjective opinion of a TripAdvisor member and not of TripAdvisor LLC.
James-Savannah W
11
Reviewed 21 November 2019
Honeymoon

We stayed here for 3 nights on part of our honeymoon. The deluxe jacuzzi sweet was very clean, the bed was not bad at all, but the thing that we loved best was the staff. Specifically Joshua at the front desk. He was so so so nice and I believe did everything in his power to make our stay more enjoyable. He really is a star employee and we very much enjoyed meeting him!

Congratulations on getting married and thanks for choosing us for you accommodations. I'm glad the staff took good care of you.

Report response as inappropriateThank you. We appreciate your input.
This response is the subjective opinion of the management representative and not of TripAdvisor LLC.
View more reviews
PreviousNext
12…