US$182
US$137
View deal
SAVE US$45
HolidayInn.comUS$152
PricelineUS$152
Lol.travelUS$182
View all 18 deals
Prices are the average nightly price provided by our partners and may not include all taxes and fees. Taxes and fees that are shown are estimates only. Please see our partners for more details.
Passenger537183
Valparaiso, Indiana
1

We chose this hotel for the proximity to the Expo Center and price. It was much cheaper than the rest in the neighborhood which made me apprehensive but it was fine! Clean & typical Holiday Inn. MJ at the front desk was very helpful and super polite. Planes going by didn't bother us at all; we actually thought it was super cool!More

Thank you so much for staying with us and for your time in providing us a review! We are so excited to hear about your experience and will absolutely pass along your praise to our very valued team member, MJ. We hope you come back to visit us soon!

Report response as inappropriateThank you. We appreciate your input.
This response is the subjective opinion of the management representative and not of TripAdvisor LLC.
See all 218 reviews
Nearby Hotels 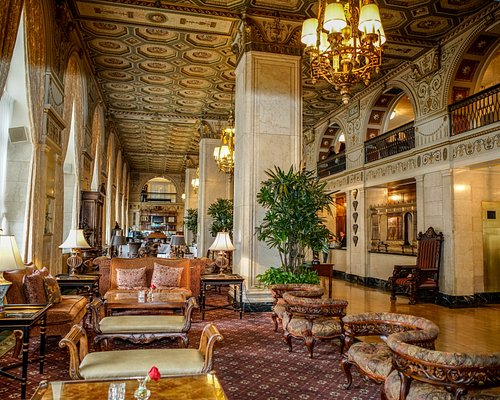 The Brown Hotel
US$139
Booking.com
View deal
Free cancellation
Expedia.com
US$134
Official Site
US$139
Priceline
US$139
View all 19 deals from US$134
2,561 reviews
5.0 km from Holiday Inn Airport & Fair/Expo Center
We compared the lowest prices from 19 websites 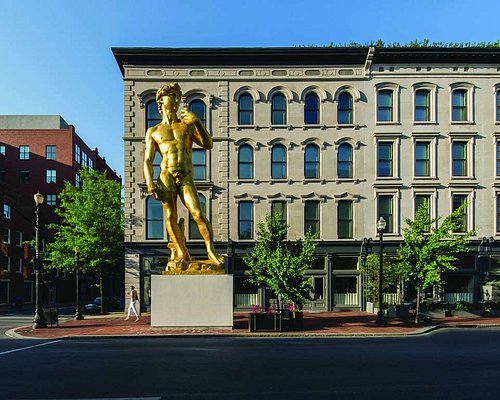 Taking safety measures
We compared the lowest prices from 20 websites
Sponsored
The Galt House, a Trademark Collection Hotel
US$199

Expedia.com
View deal
Free cancellation
Reserve now, pay at stay
Booking.com
US$78
Trip.com
US$71
StayForLong
US$106
View all 17 deals from US$71
428 reviews
18.5 km from Holiday Inn Airport & Fair/Expo Center
We compared the lowest prices from 17 websites
The Seelbach Hilton Louisville
US$150
US$125

We were in Louisville for the NASP State Archery tournament. We had the best experience during our overnight stay. The hotel lobby was clean and obviously well maintained. MJ was working at the front desk. He was extremely kind and very helpful. You can tell by his attitude that he takes pride in his job. He was so nice to every guest and greeted everyone with a genuine smile. The rooms were immaculate and well kept. I would absolutely stay here again. They also followed all CDC guidelines regarding Covid-19.

Thank you so much for staying with us and your time in writing a review of your experience! MJ is one of our star employees and I will absolutely be passing along your kind words! Safe travels and we hope to welcome you back in the near future!

Report response as inappropriateThank you. We appreciate your input.
This response is the subjective opinion of the management representative and not of TripAdvisor LLC.
kevinccc
Long Island, New York
32
Reviewed 28 March 2020
BAIT AND SWITCH AFTER A BOOKED RESERVATION !! THEY CANCELLED MY RESERVATION & SAID I COULD RE-BOOK FOR 4 TIMES THE PRICE

STAY AWAY !! After comparing prices on the hotel website & Expedia, I found them to be identical. I booked with Expedia to get the points. A few days later, Expedia said "The hotel has cancelled your reservation." When I spoke to the manager at the hotel (Roy), he said "As the Kentucky Derby is that weekend, we can do what we want." When I told him that I can't get any other hotels at this price ( $175 per night x 4 nights), he said, "I'll give you one here for $800 per night." I said "Is that important enough to take advantage of one customer to make extra money?" He chuckled and said "We did this to 8 other people as well." When I asked for the name & number of his supervisor, he hung up. I then tried dealing with IHG ( the corporate end of the hotel ), and got the complete runaround from four different people for a week. Eventually, a Miss Natti (case manager) said "A hotel can refuse service for any reason." When I asked if that included race, disability, or price change, she just kept saying "A hotel can refuse service for any reason." I kept asking what would be a "Reason", but she said, "We're not responsible for what the hotel does." The total amount of time spent on calls and letter writing has exceeded 11 hours thus far.

IF YOU WANT TO HAVE A CONFIRMED BOOKING, DO NOT BOOK WITH THIS HOTEL. THEY WILL PRICE GOUGE & BAIT AND SWITCH.

That you for your stay. Here at the hotel we offer a environment of peace and tranquility. We have view your comments and felt surprised. I'm sorry that you had trouble with your reservation. I sent a private message to discuss your stay further. I have also shared your review with our managers. They will review everything that has happened and take the proper steps to prevent these issues from happening again. We invite you to visit us in your futures stays.

Report response as inappropriateThank you. We appreciate your input.
This response is the subjective opinion of the management representative and not of TripAdvisor LLC.
Hydruland
Baltimore, Md
1412
Reviewed 17 January 2020
Great location but bad experience with food service

Have stayed at this location several times and usually excellent but had an issue with food service last visit. Wenty down to have dinner at the resturant and first issue was that I was not approached for several minutes. Was finally approached and placed drink order and tried to order fish tacos but was told out........what?? Ok, things happen, oh well! Ordered an appetizer and entre but did not come out until 75 minutes after ordering. Looked around and there was at least 15 tables waiting for food. Overheard that there was only one person in the kitchen! The three girls serving were running out of the kitchen as the food came up, felt bad for them as they were getting grief when it was not thier issue.

Thank you for taking the time to give us feedback. So sorry to hear about your experience. Please know we will look into our staffing and what happened to ensure this doesn’t happen again. We will correct this before your next visit. Thank You for your time.

Report response as inappropriateThank you. We appreciate your input.
This response is the subjective opinion of the management representative and not of TripAdvisor LLC.
Thebruders
Highland, Michigan
182
Reviewed 30 December 2019 via mobile
Traveling home

Stopped in for the night on our way home from Florida. For the most part the hotel was nice, staff was courteous and helpful. We had dinner in KEM’S and the food was very good. Carpeted halls could use update (at least on 2nd floor) our room smelled like Chinese food like someone had just been in there with carry out and bathroom floor was sticky. Other than that the room was clean and nice. We paid extra for the breakfast vouchers which incidentally do not include your beverages, even coffee. The buffet was sad looking, the food had been there for a while and there were greasy handprints on the sneeze guard. As a result we ordered off the menu. Overall our visit was not bad, but definitely could have been better.

Thank you for this feedback. We’ve updated our buffet offerings to include a beverage with your voucher I apologize for the confusion. We hope to see you again when your travels bring you back to Louisville.

Report response as inappropriateThank you. We appreciate your input.
This response is the subjective opinion of the management representative and not of TripAdvisor LLC.
janethZ1659FM
73
Reviewed 14 October 2019
ADOS Conference

This visit exceeded my expectations! The staff was accommodating as was the rooms. Shuttle service from airport a plus. Being a IHP member a PLUS! The price was great. Located near restaurants as well as public transportation to downtown Louisville.

Thank you for this review! We are thrilled you enjoyed your stay.

Report response as inappropriateThank you. We appreciate your input.
This response is the subjective opinion of the management representative and not of TripAdvisor LLC.
View more reviews
PreviousNext
123…37