Jekyll Island Club Resort
Lowest prices for your stay
Lock in the lowest price from these sites
US$229
Free cancellation until 16/05/21
View deal
FindHotelUS$229
PricelineUS$229
Hotels.comUS$229
eDreamsUS$229
Expedia.comUS$229
CheapTicketsUS$229
View all 18 deals
Prices are the average nightly price provided by our partners and may not include all taxes and fees. Taxes and fees that are shown are estimates only. Please see our partners for more details.
JonathanH4306
5932

My wife and I stayed here on a spur of the moment getaway. It was a bit more than what we normally pay, but I am glad we splurged. The staff was so nice. The room was nice as well, but it was small. The bathroom was very clean, and it had a nice shower. Our room had a beautiful view of the rooftop and the ac units. ( my wife excitedly opened the windows to see the view. It was rather funny. ) The grounds are beautiful, you can spend some time walking enjoying them. We rented a tandem bike from the property. I believe it was 40 dollars for 24 hours. They also have locks and a chain. The island is very easy to navigate by bike, and some trails start at the hotel. The sweet shoppes and snack bar were good to eat at, the pool was heated a bit dirty. I would stay here again if I came back. It was worth the money. I don't have the best pictures of the room, but it was comfortable. More

Thank you for your review! My team and I are glad you enjoyed your last minute getaway. Come again soon!

Report response as inappropriateThank you. We appreciate your input.
This response is the subjective opinion of the management representative and not of TripAdvisor LLC.
See all 1,893 reviews
Nearby Hotels 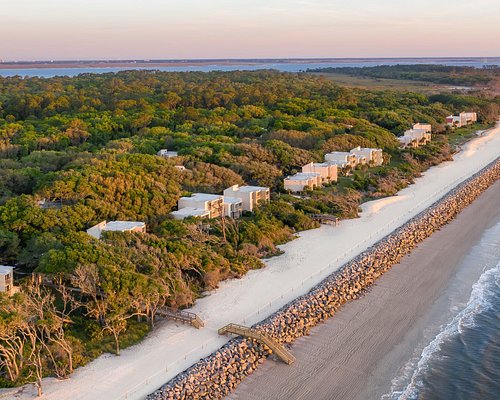 Sponsored
Villas by the Sea Resort & Conference Center
US$159

FindHotel
View deal
Hotels.com
US$159
Expedia.com
US$159
CheapTickets
US$159
View all 15 deals from US$159
721 reviews
We compared the lowest prices from 15 websites 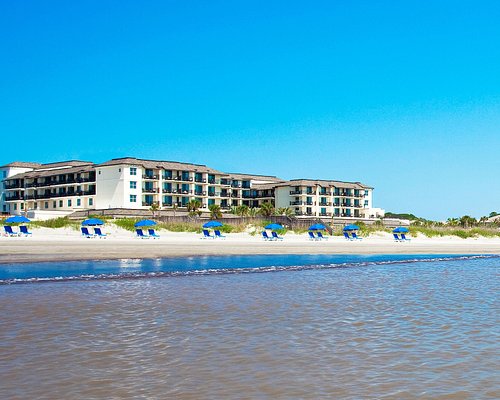 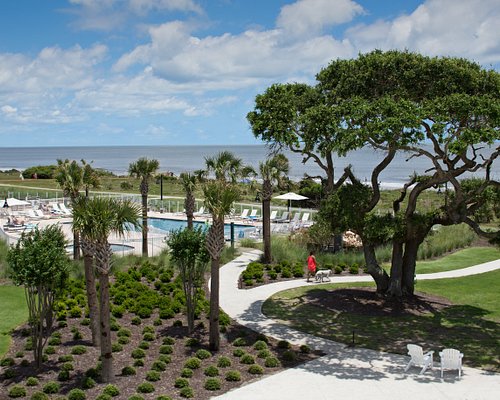 William at the lobby bar is amazing. Do yourself a favor and let this gentleman make you a drink. The whole resort is a gift. Absolute paradise. Such a relaxed wonderful atmosphere we had such a great time and William was absolutely wonderful. So respectful and such a great mixologist!

So glad you enjoyed your vacation on Jekyll Island! I am glad to hear you enjoyed your drink at The Bar and meeting William. I will be sure to pass along your praise to William and our Director of Food and Beverage.

Report response as inappropriateThank you. We appreciate your input.
This response is the subjective opinion of the management representative and not of TripAdvisor LLC.
soonerboston
New Hampshire
7643
Reviewed 6 April 2021
Simply Amazing!!!

My wife and I recently spent a three night "get away" to Jekyll Island and the Jekyll Island Resort. What a great choice this was. It was our first trip there. The grounds were impeccable, the service top shelf. We enjoyed breakfast each morning in the dining room, social distancing was practiced, the servers all wore masks and were very efficient and polite. Each day we sat out by the pool and enjoyed lunch. The wait staff walked around the pool offering beverages and lunch. One could also sit at the bar if you wished to be out of the sun. Ashley was our server/bartender out at the pool. She was excellent, We were never without a cocktail, she was polite, helpful, and offered insight into Jekyll Island and the resort. We stayed in the Cherokee Lodge. It is a little dated, but the room was clean, nice bathroom, and bed was comfortable. We were able to park in the back making our vehicle access very easy. As it was our anniversary we were welcomed at check-in by wishing us a Happy Anniversary which was a nice touch and much appreciated. We enjoyed our stay so much we will be returning during the Christmas Holidays. We are so looking forward to our next visit.

Thank you for your review of your recent stay at Cherokee! Cherokee is one of our favorite cottages. My team and I are glad you enjoyed your anniversary trip to Jekyll Island. Sounds like a great first trip! We look forward to welcoming you back in December. It is magical with all the Christmas decorations and twinkle lights decorating the island. Come again soon

Report response as inappropriateThank you. We appreciate your input.
This response is the subjective opinion of the management representative and not of TripAdvisor LLC.
N6259EImarys
11
Reviewed 5 April 2021
Beautiful grounds, room was very disappointing

On the positive side, the grounds were beautiful and immaculately kept and all of the staff were friendly and helpful. However, there were several concerns/issues we had regarding the room we stayed in.

Overall, the room was small and outdated. Specifically, there were stains on the ceiling, the cold water faucet cap came off, a piece of the shower handle was missing a cap, there was an uncovered wall anchor and pencil marks, and the biggest issue was the large leakage of water out of the shower between the two glass doors requiring multiple towels to clean up after every use. The room was located over several of the hotel generators/equipment which were loud at night. Finally, there were several spiders noted in the room (actually in/around the bedding). To summarize our impression, the room was extraordinarily underwhelming and disappointing. We’ve included some pictures for reference.

Comparable to other similarly priced resorts/hotels, we would not choose to return given the concerns stated above.

Finally, most but not certainly not all of hotel guest were wearing masks.

My team and I are sorry to hear about your disappointment with your stay. We appreciate your honest feedback. I am glad you enjoyed the beauty of the island and the grounds of the hotel. We encourage all of our guests to wear masks while on property. However, it is not required. I am troubled by the status of your room. I will be sure to let our maintenance department know of the issues. Would you be willing to call our Director of Rooms with more information so that we may work to fix the addressed concerns? You may call 800-535-9547 and select 5 to be directed to the Director.

Report response as inappropriateThank you. We appreciate your input.
This response is the subjective opinion of the management representative and not of TripAdvisor LLC.
Jean C
Bay City, Michigan
5933
Reviewed 5 April 2021
Beware the gnats!

This is a lovely old resort - reminded me of our Grand Hotel here in Michigan. Loved all the cottages and their stories. We stayed in a club room which was a small room with a queen bed. The bathroom was roomy by comparison. Everything was clean and up-to-date. Our main complaint with the room was there was no chair to sit in. Luckily we had our fold-up chairs in the car. We ate a couple meals in The Pantry which had very good sandwiches, salads and flatbreads and it was open all day. We didn't make reservations ahead of time so we couldn't get into The Wharf restaurant and the Grand Dining Room is closed right now due to Covid. The pool area was very nice except for the gnats! That they give you bug wipes in the room should have been a clue! There is bar and lunch service in the pool area.

Thank you for your review! I must admit your Headline made me laugh. "Beware of the gnats" - yes, the gnats are a funny pest. You will find the gnats up and down the coast in the South. They drive the locals up a wall every Spring. While I am sorry you had to battle the gnats at the pool, I am glad they did not impact your stay! It sounds like you had a wonderful visit. I am glad you enjoyed The Pantry and The Pool House. Jekyll Island is full of history and charm. Come again in the winter or the summer. The gnats will be gone.

Report response as inappropriateThank you. We appreciate your input.
This response is the subjective opinion of the management representative and not of TripAdvisor LLC.
orlandotraveler2018
Florida
6520
Reviewed 4 April 2021 via mobile
Grand Old Hotel showing its age

The hotel is a gem, but needs some renovations and TLC. The grounds were well kept. Rooms were very nice with comfortable beds and linens. Pillows were inferior and uncomfortable. No staff were available to assist with bags or housekeeping. Guests are left to haul luggage up and down steps. A call to housekeeping for new towels and coffee went unanswered. Bike paths were exceptional and beautiful. There is a need for additional bike racks as they were full each night. Although we didn't eat in the pantry, it appeared to be well stocked and tasty. Check your bill before checkout as we were incorrectly charged. While waiting in line for a correction, I overheard the group before us there because of an overcharge.

Thank you for your review. We will make note of your concerns for the property and work with our maintenance department to improve all we can. Due to the current pandemic, our bell service and housekeeping have been limited for the protection of our guests and employees. We are glad you enjoyed your stay!

Report response as inappropriateThank you. We appreciate your input.
This response is the subjective opinion of the management representative and not of TripAdvisor LLC.
View more reviews
PreviousNext
1…345…316