$219
Free cancellation until 05/28/22
View deal
Booking.com$219
Hotels.com$219
Tripadvisor$219
Priceline
Travelocity$219
FindHotel
View all 20 deals
Prices are the average nightly price provided by our partners and may not include all taxes and fees. Taxes and fees that are shown are estimates only. Please see our partners for more details.
Kathie S
218

Relaxing by the ocean

My cousin and I were going to SF for a show and we wanted an extra day without the expense and hassle of San Francisco. We stumbled on Pacific Beach Hotel mostly for the price and boy are we glad we did. It is an older place sitting up on the hill above the beach. You could have a room with a ocean view and even a balcony if you so desire. There is a glass enclosed heated pool with the ocean view for a great place to unwind and watch the sun set. The desk staff was excellent, especially Destiny. No pay for parking. Has handicapped parking. The rooms were clean and comfortable. The town of Pacifica has ample shopping, both tourist and necessities like Safeway and Riteaid without the feel of a city. We had dinner at Nicks on the beach and it was superb. Breakfast at a little cafe in the strip mall and it was over the top. My only disappointment and I can't really call it that, was the continental breakfast. Very minimal but if continental is what you like it was typical. Great place all around. Would stay there again. Can't wait to go back.More

Show less
Room tip: Pay the ten dollars extra for the ocean side room with a window.
See all 376 reviews
Nearby Hotels 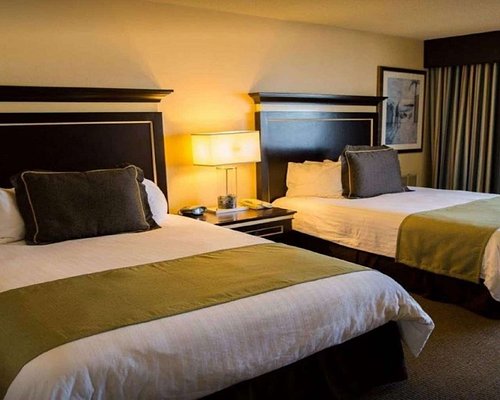 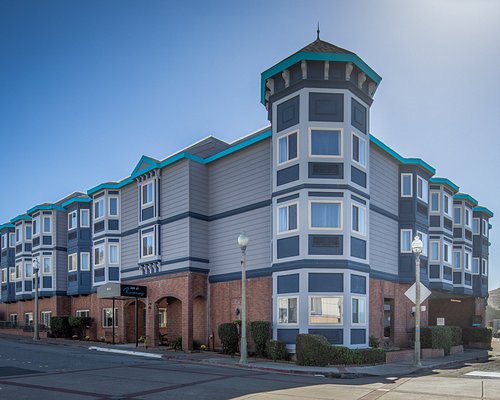 We stayed at the Pacifica Beach Hotel on a trip to Northern California. The hotel is a nice location right across the PCH from Pacifica Beach and is close to Grey Whale cove nude beach as well. The room was clean and the in room jacuzzi was nice for my GF and I to wind down in at night. The room was a good size and was quiet when we stayed there. The king bed in our room was ok. We did not go down to the hotel restaurant during our stay. Parking was in the outdoor lot around the hotel. Overall, we stayed there because of its location to the beaches. It was a pleasant stay and we would likely stay there again.

This review is the subjective opinion of a Tripadvisor member and not of TripAdvisor LLC.
kwcani
canada
1113
Reviewed April 18, 2017
Don't Bother

The bottom line is, this hotel is NOT on the beach as they have advertised. It is across a very busy street from the beach, about a 10 minute walk. Very over-priced, is basically just a roadside motel. I would give no stars if that were an option because of their deliberate lie.

This review is the subjective opinion of a Tripadvisor member and not of TripAdvisor LLC.
baretu22
Cross River, New York
51
Reviewed April 7, 2017 via mobile
This place should be leveled...STAY AWAY

This place was so gross that I packed up my family after an hour and just went to another hotel. There was hair on the bathroom floor, cob webs and dust all over. They have nerve charging the rates they do. This is a glorified hourly motel. I would have rather slept inside the restaurant on the property, which oddly is quite good. STAY AWAY...

This review is the subjective opinion of a Tripadvisor member and not of TripAdvisor LLC.
TravelUSA5
Flagstaff, Arizona
83
Reviewed April 2, 2017
Really great place that needs a little maintenance; in-room jacuzzi didn't work

Our room was very nice, 302. It has a lovely ocean view, and lots of light from the tower ceiling with 8 windows. Upon entrance, it's five star. When you start using anything in the room, however, pieces of a star fall away a little bit at a time. For example, there was beach sand all over the foot of the bed and on the bed frame. The strings for the roman window shades had been repaired and rigged up a few times, requiring extra effort to enjoy the view. The in-room Jacuzzi didn't work when we tried it, so we called the front desk. After a while, the sweet front desk attendant came with a screw driver and got it to work...for 10 minutes. So, we went to dinner, came back and called about the Jacuzzi. The same dear front desk attendant showed up with her trusty screwdriver and fiddled around with it again until it worked. Ten minutes later, it shut down again. Such a disappointment. The whole reason we booked here was to have the jacuzzi. That said, the staff is incredibly nice. The place was quiet and clean, just a bit run-down in spots. The bed and pillows were perfectly comfy. The TV had cable, so I didn't miss RuPaul! The on-site restaurant, Puerto 27, is spectacular! And the location, across from the ocean, just can't be beat.

Dear TravelUSA5
Thank you so much for your review and thank you for staying with us and enjoying these beautiful views we have from our room. Pacifica is very beautiful city where the whole city lies right in front of Pacific Ocean. The views from the hotel is spectucular and nice sea breeze all day long. I do apologize for the inconvience you faced while your stay with us and let me assure you that all those inconviences will be dealt with and fixed for all our future guests. The Sand you found in the room was most probably from the previous guest who had lot of fun on the beach and brought that with them to the room. However, our housekeeping team has been trained to make sure that all rooms are thoroghly cleaned and inspected before renting out to any guests. My apologies for the Jaquzzi that didnt work as per your expectation and I will share with that "sweet front desk attendent" about your kind words and at the same time train our maintenance team to make sure everything in the room is in working order.
Just to name a few we have a lot more to offer at our location as you mentioned, the Peruvian Restaurant and some nice trails just by the hotel.
Hope you will give us another chance to prove that we are here to make every guests stay as more fun and enoyable as possible and to make all guest feel home away from home.

Report response as inappropriateThank you. We appreciate your input.
This response is the subjective opinion of the management representative and not of TripAdvisor LLC.
RescueScott
Rescue, California
269
Reviewed March 22, 2017
Truly Bottom of the Heap

Floors dirty
Fire place doesn't work
Lamp doesn't work
Room was not full ocean view as promised - until we agreed to pay extra
Took our towels up to tiny pool where girls had been smoking in the INDOOR area.
They wouldn't replace our towels for morning - Said we had already used ours. No room service vice. Tiny shower. No extra pillows…

This review is the subjective opinion of a Tripadvisor member and not of TripAdvisor LLC.
View more reviews
PreviousNext
1…161718…