US$139
View deal
Free cancellation until 10/12/21
Reserve now, pay at stay
Hotels.comUS$131
DanaPointMarinaUS$139
Trip.comUS$141
View all 20 deals
Prices are the average nightly price provided by our partners and may not include all taxes and fees. Taxes and fees that are shown are estimates only. Please see our partners for more details.
Valerina1969
Los Angeles, California
113

The staff was super friendly. The pool and jacuzzi were great, but the location is the only reason to stay here if you're going to the Ohana Festival. It is walking distance, but also right next to the harbor restaurants and shops, including a little market/liquor store. The issue with the hotel itself is that it is pretty run down. The carpet (at least in our room) had many stains on it, paint was peeling, the door didn't really fit and the light from the hallway was shining in between the cracks, so much so that it lit up our room at night. The walls are basically hollow and we could hear everything going on the the next rooms. Considering we were there for the festival and just needed a place to lay our head down at night, we definitely would stay here again for that only. However, the beds were NOT comfortable. They seriously need a better mattress or mattress pad. The price was fair based on what the surrounding hotels were charging (I actually stayed 7 nights at a "better" hotel the week before this stay) and this rate was about $100 less per night. The fact that we could walk to all the restaurants AND the festival, it was totally worth it.More Taking safety measures
We compared the lowest prices from 21 websites 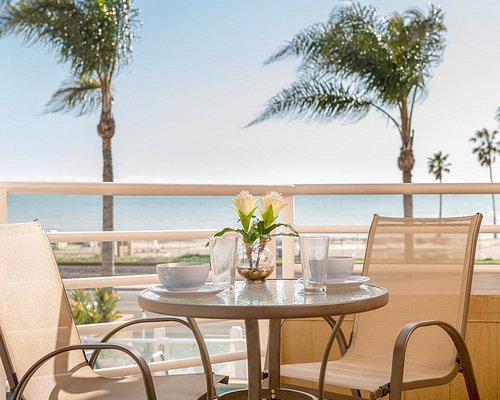 Expedia.com
View deal
Pay up to 12X
Booking.com
US$129
FindHotel
US$93
Hotels.com
US$116
View all 20 deals from US$93
285 reviews
2.0 km from Dana Point Marina Inn
We compared the lowest prices from 20 websites
Top Rated
Breakfast included
Sponsored
Blue Lantern Inn - A Four Sisters Inn
US$357
Tripadvisor
View deal
Free cancellation
Pay up to 12X
Hotels.com
Booking.com
US$357
Expedia.com
US$357
View all 20 deals from US$357
597 reviews

Taking safety measures
We compared the lowest prices from 20 websites
Capistrano Surfside Inn
US$229
US$219
Tripadvisor
View deal
Free cancellation
Pay up to 12X
Hotels.com
Expedia.com
US$219
Booking.com
US$229
View all 17 deals from US$219
192 reviews
2.2 km from Dana Point Marina Inn

Taking safety measures
We compared the lowest prices from 17 websites
Breakfast included
Best Western Plus Dana Point Inn-By-The-Sea
US$179
US$114
Booking.com
View deal
Reserve now, pay at stay
Expedia.com
US$114
Priceline
US$114
ZenHotels.com
US$179
View all 22 deals from US$114
832 reviews
2.4 km from Dana Point Marina Inn

The hotel location is perfect. We attended the Ohana Festival. Many good restaurants nearby and easy to walk to the festival. The rooms are dated but are clean. The staff was very friendly and helpful. The breakfast was good. It is a great place to get a good night’s sleep and recharge for another day of music.

This review is the subjective opinion of a Tripadvisor member and not of TripAdvisor LLC.
JohnK297
Kingman, Arizona
67
Reviewed 24 September 2021 via mobile
Absolutely fantastic stay.

I spent many summers at this hotel as a kid, so when my wife and I were visiting California at the end of August this year I thought it would be fun to stay there. I have given this review five stars, because of the friendliness of the staff, location and the overall condition of the facility. Yes it’s true that you won’t be staying in a super modern room, but our room was very clean and everything was in good working condition. We paid just under $200.00 a night and had a view of the harbor and I must say it was absolutely gorgeous. We considered staying at other properties, but for $170.00 a night compared to $600.00+ for an ocean view pretty much anywhere else along the coast this place is a fantastic deal. We felt very safe during our stay and the breakfast was very good. The property is very close to a beautiful beach and there are numerous good restaurants near by. My wife and I are planning another trip to California in the near future and we’ll definitely be staying at the Marina Inn.

This review is the subjective opinion of a Tripadvisor member and not of TripAdvisor LLC.
1LuckyPerson
5
Reviewed 24 August 2021
Good location - Thin walls - Fair Value

Double queen room for travel partner and self. Rates fair for area. Good location with good restaurants marina and beaches in walking distance. A spot to throw your gear, but nothing to spend time at the hotel for. Noisy second floor neighbor; use wall ac for white sound countering effort. Clean, and felt safe parking car there. VERY good bfast, lunch and dinner spots across streets, none of which were on their "recommended list", however, the front desk person was helpful.

Room tip: you get what you pay for. If they have a suite, maybe a good value?
Ask 1LuckyPerson about Dana Point Marina Inn
Thank 1LuckyPerson

This review is the subjective opinion of a Tripadvisor member and not of TripAdvisor LLC.
14BonnieM
Alta Loma, California
52
Reviewed 9 August 2021 via mobile
Terrible experience

If I could give this hotel a zero review I would. We arrived and checked in only one staff member to check in a long line of guests. They did not tell us at check in we had no hot water and the water was going to be shut off the following day. They don’t provide any service to the rooms, you have to pick up towels In The lobby. The room was not cleaned or sanitized per there advertisement. I dropped something on the
Floor and looked under the bed and there was empty coke cans and trash under both beds. The shower had hair I. It and the used soap from the prior guest. When I went to the lobby and asked if they would please clean the room since we were staying for 5 days they said they only clean it if you stay for a week. I explained to the housekeeping supervisor how dirty the room was and she argued with we along with the other lady at the front desk. She finally agreed to go in and clean up the trash but did nothing else to clean the room. The last day we extended our stay. The man at the front desk told me it was cheaper to book through my orbitz app on my phone so I followed his instructions. Sure enough we get a knock on the door the
Following day to tell us we had to move rooms. After spending over 1,000 dollars they wanted us out of our pool view room. We ended up leaving and they said they refunded us which they didn’t. Now I am working to get my funds back. We have stayed at this hotel for many years but will never return. This property is poorly managed and very dirty. The patios were not cleaned in front of the rooms and the rooms are not cleaned properly.

This review is the subjective opinion of a Tripadvisor member and not of TripAdvisor LLC.
vacationchs
48
Reviewed 9 July 2021
This hotel is not somewhere I would stay again

We had a good stay, it was fine, but I would not stay here again. The rooms were just not very nice. They were cleaned well by staff, but there were cracks and rust in the tile, dirty hallway windows, etc, that just made it feel dirty. The worst part was the way the sink and tub would not drain when you were using them, and would fill with dirty water, it was gross. They ran out of towels one night, so we couldn't get more until the next morning. The walls were thin and we could hear the man in the next room snoring, we were worried it would keep us up, but the air conditioner sound drowned him out. There's no safe in the room which I wasn't happy about. The beds were comfortable, which was a plus. The lobby was clean. Another guest was complaining that they had laundry stolen from the laundry room, so I chose not to do laundry there. We stayed there because of the free breakfast, but the breakfast was very disappointing, we didn't even eat, so that was unfortunate. The staff member serving breakfast was a little rude, the eggs were not good they tasted odd, they had cereal but ran out of milk, were out of bagels, and while they had good looking waffles, they had only syrup for toppings. They could have jazzed it up with some more creative toppings like powdered sugar or chocolate chips for more bang for their buck. The first employee we dealt with at the front desk was outstanding, the second just average and not very helpful, but not bad. Overall we didn't feel the need to check out early, but also would not recommend it and would not stay there again. The location was desirable though, hopefully at some point they'll fix up the hotel.