Breakfast was friendly - I had a window seat which is appreciated because lone travelers usually get seated behind a pillar somewhere. Friendly service and a much appreciated bread basket which I devoured having not eaten dinner.
If the stay sounds awful - it wasn’t entirely. My expectations were probably too high. It’s not a good place for lone travelers. But the staff are friendly and if you try and get a smaller room - and get the heating right - and bring your own sandwich if traveling alone - and get to meet the castle dog, Roisin, then I think you’d have a more enjoyable stay.

The castle adjusted my bill because of the heating problem which I appreciated.

As a footnote - I often stay in hotels alone and the stay is almost always negative - often due being given the smallest and most uncomfortable room. A few times - I’ve requested dinner away from the dining room and been told no. It’s often ok if alternate locations are available - not in this case. (I had a large room in this case - the only one available when I booked).More

14% less than usual
Riverside Hotel
US$68
US$59
Booking.com
View deal
Free cancellation
Expedia.com
US$68
Priceline
US$68
eDreams
US$59
View all 11 deals from US$59
998 reviews
10.8 km from Markree Castle
We compared the lowest prices from 11 websites 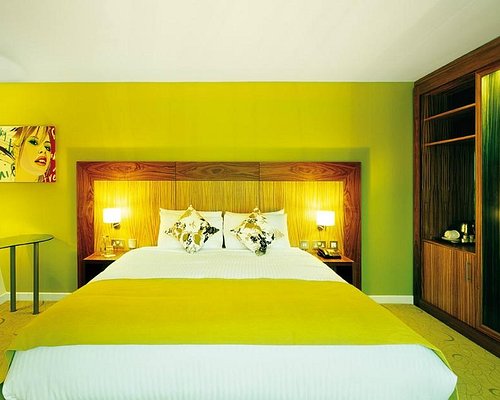 Ill keep it simple, a beautiful location with beautifully maintained gardens watched over by Rosin the lovely wolfhound.

The castle well maintained, so many rooms to socialise in, the decor often offers a "wow" factor.
We booked dinner, standard excellent with a good variety for everyone.

Finally the staff so welcoming, a pleasure to deal with them, nothing was to much trouble and already looking forward to my next trip ,the rooms v clean, spacious with views of the gardens. A visit id recommend highly.

This review is the subjective opinion of a Tripadvisor member and not of TripAdvisor LLC.
passingbird93
Belfast, United Kingdom
4514
Reviewed 30 August 2021 via mobile
Absolutely outstanding

We stayed here for one night on our Wild Atlantic Way road trip. The castle is absolutely beautiful with lovely gardens. Our room was lovely and we were encouraged to explore the castle. We thought it was lovely that the castle has so many "social" areas to relax in and a games room, lots of choice.

Our dinner in the restaurant was outstanding, beautiful 5 course meal and the staff were polite and courteous without being overbearing. Wine choice and cocktails were lovely.

Breakfast was also superb but service a little more disjointed. Check out was a leisurely 12 noon so we had plenty of time to relax and make the most of the morning. We will definitely be returning to this hotel and checking out the other sister romantic castle hotels.

Room tip: Ask for a room with a view of the gardens
Trip type: Traveled as a couple
Ask passingbird93 about Markree Castle
1  Thank passingbird93

This review is the subjective opinion of a Tripadvisor member and not of TripAdvisor LLC.
HellsBells2719
Cork, Ireland
2510
Reviewed 22 August 2021 via mobile
Perfection

Cannot fault this incredible stay. Food, accommodation, staff. Faultless
I love the bath!! Dinner was impeccable, you have to go for a walk in the grounds, just perfect. No Internet and phone reception was iffy, so a great place to really switch off!

Room tip: No WiFi, so if you expect to be able to get online you'll be disappointed, HOWEVER, when you get there that won't bother you
Trip type: Traveled as a couple
Ask HellsBells2719 about Markree Castle
2  Thank HellsBells2719

This review is the subjective opinion of a Tripadvisor member and not of TripAdvisor LLC.
clairecQ9642QT
23
Reviewed 17 August 2021
Fairytale wedding

We have just returned home from having our wedding at the castle. The day was absolute perfection. This was our 3rd date due to covid 19. I know some people have had difficulty with their venues about moving dates or being charged over the odds, but Markree was absolutely amazing. We moved our dates twice without any problems, in fact Deirdre could not have been more helpful in holding new dates until we confirmed with suppliers it also suited them. I will say as well that the value for money, to be able to rent an entire castle for yourself and your guests, was unreal. They had created a price package for covid restricted weddings which honesty couldnt be beaten.

We decided to stick with a small wedding of 30 even though regulations allowed for more. Each and every guest was made to feel so important, with the service being outstanding, nothing was too much to ask for and the extra touches were constant. I noticed during the dinner in particular that the number of staff to number of guests was particularly good. I have not seen such a good ratio at a wedding before. This meant that no one was ever left without a drink in their hands or an empty plate in front of them. We were even brought out our canapes while we had our photos taken outside. (Roisin unfortunately gobbled these up but it was hilarious) And oh my god the food! Guests couldnt get over not only how delicious it was, but the choice (we were given 3 choices of main and 2 starters with our menu) and the amount of food! It just kept coming!! We also had some picky eaters who ordered their own completely different menus, all of which was catered to without having to remind anyone on the day itself.

If I left a drink down it was replaced or brought to me, if the bouquets were abandoned, they were placed in water and displayed on the mantlepiece. In the morning I asked for bubbly and straws were brought too so as not to ruin my freshly applied makeup. Staff were more than happy to run things from where I was getting ready to my fiance in his room. Our guestbook was moved to wherever we were in the castle, as was our welcome sign (we didnt even ask for this, but it meant every guest signed our guestbook and everyone enjoyed our lovely sign). We had also asked for certain flowers to be moved with us when we moved to different areas of the castle and this was done seamlessly without reminding staff. My breakfast was brought to me in the butlers kitchen in the morning so that I could have it without accidently bumping into my fiance, who I didnt want to see before the ceremony.

We wanted to have our ceremony outside, but the weather was changeable right up until half an hour before we were due to start. Our musicians made the call in the end, but both ceremony locations were organised and ready for whatever last mintue decision was made.

We even had an issue with our placenames in that some of the ones we brought were missing- so Deirdre had a whole new (beautiful) set printed and displayed for us, within less than an hour of us realising!

We also wanted our fireworks display to be a surpise, and arranged it so that we would have sparklers with the guests first and the fireworks would start. The bar manager (I am sorry I dont know his name-he was also brilliant!) had it timed with our fireworks company that literally the minute the last sparkler went out, the fireworks started. It was like something from a movie! And they were all so discrete no one found out in advance.

I could go on and on about how amazing our day was, and how flawless both the castle itself and the service were. Not one single thing could I fault about the day. From what our guests said they were absolutely blown away too. Deirdre & Nicholas who run the castle are a dream to work with & since were are not from Sligo most of the planning was done via email with Deirdre, who responded quickly to every question I had. If you are in any way considering the castle for your big day- do it! You will not regret it. You will be in safe hands! We honestly were made to feel like we were so important, almost like the only wedding they were having this year! I have no idea how they keep up the leevl of service for every guest and every wedding, but evidently they do!

Thank you so much again Deirdre & Nicholas & all of your wonderful staff!

This review is the subjective opinion of a Tripadvisor member and not of TripAdvisor LLC.
Spannerman276
196
Reviewed 14 August 2021 via mobile
First class stay.

First time here and was not disappointed, staff first class in every way, food way above average, breakfast first class,
Room a little basic but spotlessly clean.
Quiet and peaceful relaxing time had, will definitely return. The castle and grounds are amazing to see and walk around to enjoy,
Roisin the Irish wolfhound is the star attraction!

This review is the subjective opinion of a Tripadvisor member and not of TripAdvisor LLC.
View more reviews
PreviousNext
123…
<script type='text/javascript' crossorigin='anonymous' async onerror='__scriptLoadError(this,true);' s