If you don't require much and are in great physical shape, you might like this resort. - Villas Sol Hotel And Beach Resort All Inclusive

US$183
US$152
View Deal
SAVE US$31
Free cancellation until 07/03/21
Booking.com
Orbitz.com
eDreamsUS$183
View all 11 deals
Prices are the average nightly price provided by our partners and may not include all taxes and fees. Taxes and fees that are shown are estimates only. Please see our partners for more details.
Diana N
Millis, Massachusetts
7838

Villas Sol is quite far from the rain forest and other beautiful settings in Costa Rica, but if you've seen them already, then you'll probably enjoy this resort. If you have high expectations for the variety of dining options, you'll be disappointed. Only 2 restaurants and one was only open M - W - F night with limited seating requiring a reservation. Great Staff! Not at all handicap accessible. You need to be in great shape to hike up all of the stairs to get to dining or the pools. No WiFi in the rooms. And ungodly uncomfortable furniture. But still, it's a lovely setting. If you don't require much, give it a try.More

Show less
Review collected in partnership with RCI
This business uses tools provided by Tripadvisor (or one of its official Review Collection Partners) to encourage and collect guest reviews, including this one.
See all 1,544 reviews
Nearby Hotels 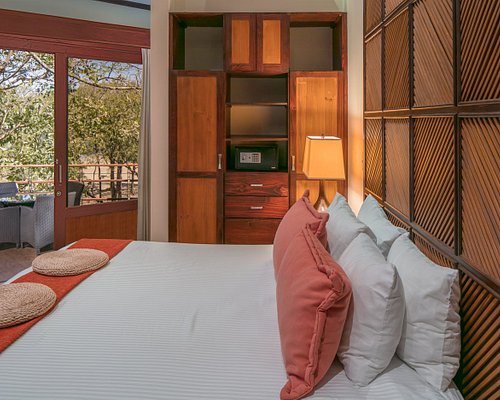 Expedia.com
View Deal
Pay up to 12X
Hotels.com
US$175
Trip.com
US$165
ZenHotels.com
US$257
View all 10 deals from US$165
752 reviews
1.3 km from Villas Sol Hotel And Beach Resort All Inclusive
We compared the lowest prices from 10 websites 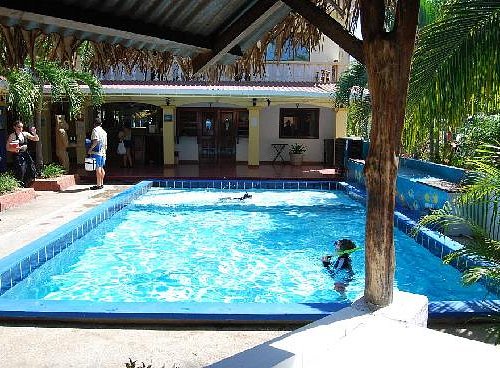 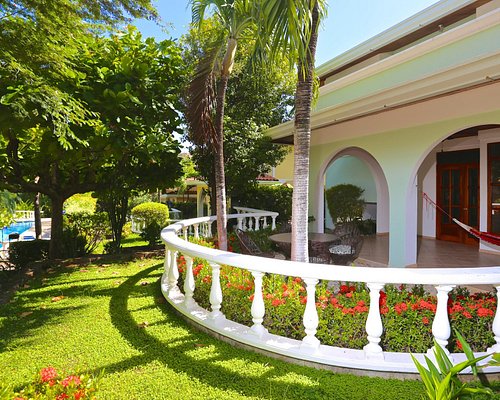 eDreams
View Deal
Booking.com
US$155
Agoda.com
US$155
Tripadvisor
US$155
193 reviews
0.5 km from Villas Sol Hotel And Beach Resort All Inclusive
We compared the lowest prices from 4 websites
Villas Acacia Beach & Garden Hotel
US$104

We had a group of 10 who came on a diving trip and we had an excellent experience and great time. The staff got to know us and set up a big table for us at meals, the shuttle drivers were great at getting us to and from the beach for our dives. The food was delicious, (repetitive selections sometimes but we only had 2 meals out of the Resort so that says something!) and the bars were great. We did one tour through the tour desk and that was well done.
It's a beautiful location and I would definitely return!

Thanks you so much for your review, all our staff do all possible to bring awesome experience at our guest.

Report response as inappropriateThank you. We appreciate your input.
This response is the subjective opinion of the management representative and not of TripAdvisor LLC.
chiefbluehawk
Onalaska, Wisconsin
13263
Reviewed 10 March 2020
Glad I didn't listen to the negative reviews. We had a wonderful experience

The clean rooms, good tour company, the restaurant workers, it really was very good. Restaurant offers a different themed buffet every night. I would say this resort would be geared for younger families or older couples...though the walking to the villas would be a challenge even when you take a shuttle. The beach is not too far away. The shuttle takes you right to it. The tour company on site is Wanderlust and Dilan was amazing to work with. We had different guides but Gabriel was our favorite. Other tour optionsIf you like to get into the nightclub scene-you may need to go to coco beach-shuttles are $10 roundtrip from Hermosa Beach to Coco Beach. There are other restaurants nearby Playa Hermosa and Villas Sol also has another restaurant that you need a reservation for, we tried the burgers/pizzas/ sandwiches at a snack area was good, a nice gift shop, and a mini mart. The views of ocean are amazing and we only had one small maintenance issue-our key plate got knocked off but someone came by fairly quickly. When we needed any extras from housekeeping they also were over in a proper waiting time. Was it the best all-inclusive I have stayed at? no, but it was quiet, and it was much better than some reviews. Bar had all kinds of booze, and they were NOT watered down. Themed meals were always enough food to choose from. Our wi-fi worked splendidly. Very good is probably a more accurate rating, but to hear some reviews it would be very difficult to rate this resort below average.

Hello!
Thanks for your wonderful words, we hope you come back soon.

Report response as inappropriateThank you. We appreciate your input.
This response is the subjective opinion of the management representative and not of TripAdvisor LLC.
JFQuessy
Joliette, Canada
158
Reviewed 3 March 2020
Pretty good hotel, but potential dishonnest staff members

Very good hotel, pretty clean, nicely located. Most of the staff is smiling and really helpful. We had a trouble with our balcony door when we arrived and 5 minutes later, someone was in our room to repair it. The room (we had an upgraded one) was perfectly comfortable and air conditioning worked well. The shuttle service works great. Drinks are hard to beat, not too much sugared and tasted real fruits. Buffet is small, not very varied, but tastes pretty good and really did the job for us.

You have to know that you won't have water, juice, coffee (except one), soft drinks in your fridge. Nothing. You'll have to refill your bottles by yourself. Also, no bar at the beach (2 days/7, a table was installed at the beach with juice and water).

However, when we checked out, the woman at the front desk told us we had to pay an extra 50$US because two towels in our room had vomit and needed a special wash. What the hell??? The housemaid sent her a picture. That was totally absurd and we refused to pay because nobody had been sick among our family. She insisted a lot, said we had to pay. We still refused because that didn't make any sense. She downgraded the price, but we still refused to pay. My wife and I asked for a supervisor and, 5 minutes later, she told us that we could leave. Another family, that left by the same bus, had to pay an extra fee because they had supposedly left the room "dirty". Be careful, some staff members look dishonnest.

Hello!
Thanks for your review!
About to the process when our guest produce a damage in the rooms or the propiety, each department (could be house keeping or maintenence) report to reception and reception call the rooms to let know the customer the situatition (obiously not all the time we can contact the guest becouse they are doing a tour or are using the pool or restaurants...) In case the towels with blood or barf that is delicate to clean to prevent illnes by virus or bacterias, often we never reuse that towels for this reason we charge to the guest, or minimun charge deep cleaning. This process is tryning have hight standars on cleaning process.

Is important inform that we do not charge to you, even though the towels in side to your room did smells to vomit (you told was juice, any case is not accptable), the manager decide do not charge, becouse you never accept that responsabilitie.

Respect to the minifridge is part to the furniture in side to the room like the tv, security box, coffeemaker, iron, beds chairs in others... but we do not provide drinks in side to the rooms, the all inclusive provide unlimited drinks but just on the bars. Finally about the coffee package, yes we provide one package like courtesy, if the guest needs aditional coffee must to pay for that.

Report response as inappropriateThank you. We appreciate your input.
This response is the subjective opinion of the management representative and not of TripAdvisor LLC.
J B
Evergreen Park, Illinois
53
Reviewed 2 March 2020
Nice enough resort

Every single staff person at this resort was friendly and helpful. The unit was very clean, no luxuries through. For a unit that easily sleeps 4, it would have been nice to have had room to seat 4 comfortably in the living room. This was my first "all inclusive" experience. The drinks were pretty tasty, but the food was not. We ate out on several occasions in lieu of eating at their buffet. The shuttles were very handy (and frequent) as the resort is located in a mountanous region. The pools were extremely CLEAN and the one with the wet bar was fun. We had a great family vacation here.

Review collected in partnership with RCI
This business uses tools provided by Tripadvisor (or one of its official Review Collection Partners) to encourage and collect guest reviews, including this one.
Ask J B about Villas Sol Hotel And Beach Resort All Inclusive
2  Thank J B

Thanks for your great review!
To check with our chef and restaurant captain what happened during your stay, can you let me know the reservation number, or the name under was booked your reservation.
One more time, thanks for your review.

Report response as inappropriateThank you. We appreciate your input.
This response is the subjective opinion of the management representative and not of TripAdvisor LLC.
tmonster_67
Kitchener, Canada
36104
Reviewed 29 February 2020 via mobile
Pura vida in Playa Hermosa

This resort is situated in the hills on a lovely beach. The beach is fairly far from the beach, and the walk is quite steep. The beach is public and not very conducive to hanging out for any length of time as there’s no real bar or lounging area for guests. There are restaurants though if you want to eat/drink.
The villa rooms are clean but ours was quite basic and small. Most rooms have a great view and face the ocean with amazing sunset views.
Food was fine and drinks plentiful and the staff we encountered was amazing!
I also used the spa for a deep tissue massage and it was also amazing!

Thanks for your nice review, one of our strengths is the ocean view, if you visit us at the future I recomend do you reservation directly with us and request for hotel room to get better ocean view. Can contact to calling to (506) 40016462 or send an email to reservaciones@villassol.com.

Report response as inappropriateThank you. We appreciate your input.
This response is the subjective opinion of the management representative and not of TripAdvisor LLC.
View more reviews
PreviousNext
1234…258