$41
$30
View deal
Priceline$36
Travelocity$37
Hotels.com$37
View all 15 deals
Prices are the average nightly price provided by our partners and may not include all taxes and fees. Taxes and fees that are shown are estimates only. Please see our partners for more details.
naomisU9176WJ
Quezon City, Philippines
4610

Review of Hayahay Resort
Reviewed May 31, 2019 via mobile

If you want a beachfront property near everything, this is a good place for you. More affordable compared to other resorts within the area. Near buzz cafe and hennan resort. Friendly staff but very weak wifi. You can stay in the reception area for faster wifi.

Trip type: Traveled as a couple
See all 165 reviews
Nearby Hotels 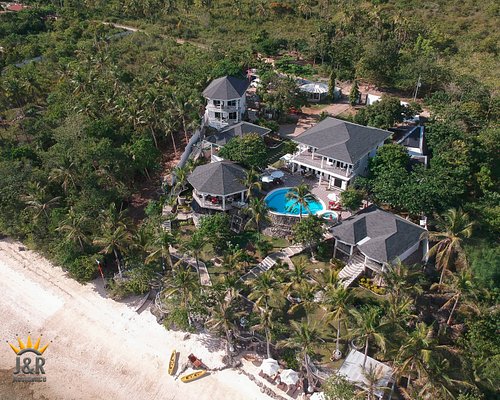 We stayed a couple of days here in a nice room with no natural light. It’s a pity that they have in front of the room there is the wall of the neighbor building. You should maybe buy your own toiletries, the shower gel was enough for one day only in the dispenser and when we asked for some it came after 2 days in a tiny jar.

This review is the subjective opinion of a Tripadvisor member and not of TripAdvisor LLC.
Kimbelina24
Auckland Central, New Zealand
5333
Reviewed May 11, 2019
Nice and convenient

I ate at the restaurant there as well, food was nice enough. Restaurant and accommodation quite overpriced for the Philippines and for the the quality, however similar tourist prices/standards within the area. I liked being able to charge meals to my room, as well as their connection with Genesis Divers as received a discount due to that as well.

Its near some bars that have live music, so was a bit noisy but this stopped at 11pm each night.

As a single traveller this place fine for me, however if I were travelling as a couple or family I would probably stay somewhere a little bigger (ie with a pool, bar, ocean views etc).

Room tip: Room #1 has the only semi-view and outdoor seating that I could see.
Ask Kimbelina24 about Hayahay Resort
Thank Kimbelina24

This review is the subjective opinion of a Tripadvisor member and not of TripAdvisor LLC.
Jinkster22
Melbourne, Australia
9775
Reviewed April 16, 2019
In the middle of the action

We arrived at Hayahay after spending 2 weeks in Palawan where we stayed in some really nice resorts, so on arriving we were a little bit hesitant because of the older, tired room (and no view of anything really) but as it turned out the location made up for all of the shortfalls. Just a short note on transportation, we had arrived at Cebu airport and paid P270 for a taxi to ferry terminal 1 where we were charged P10 for the taxi to come into the port with our luggage which was great. We opted for the open air class (P450) rather that the inside tourist class (P500) which provided a covered seating area and is a good choice. You also are charged the port fee P25 pp and a baggage fee P50. On arrival at Tagbilaran we arranged a tricycle to Alona Beach for P300. Note that you need to carry your baggage about 100m along the sandy track to the hotel from where you are dropped off. On arrival the hotel staff were not overly friendly but still ok - I had to keep asking about the wifi and they would reset the router, but in reality don't expect any great internet connection here. The rooms are old and a bit worn out, but still clean and comfortable and a little cramped. Its all about location location location - the hotel is right amongst everything that you would need - there are small shops nearby for snacks, beers, etc, plenty of restaurants / bars to choose from, and you are right on the beach as soon as you walk out of the hotel. It is surprisingly quiet at night (no roads) apart from the music next door, but thankfully it was always shutdown before 11pm each night. A quick word on wifi - most of the bars / restaurants have wifi and it is so much better than the hotel. There are a few bars offering happy hour with beers for P50 and cocktails P100 so worth a visit even if it is only for the wifi .....Most of the nearby restaurants are relatively expensive as you would expect - if you shop around it is surprising that some restaurants charge so much more for a particular dish, so check a few out depending upon what you want to eat. We didn't eat at Hayahay as we found it overly expensive for their seafood dishes. There is also a 7-11 nearby and a McDonalds under construction ...... Note that on the corner where you are dropped off in Alona Beach there are many touts selling boat tours, transfers, motor bikes, etc. I chatted to a few and this is where I organised a motorbike to hire as well as our transfer back to Tagbilaran pier for the ferry back to Cebu. I also organised a private boat to take us to the Balicasag Marine Sanctuary for P2000 (whole boat) plus entrance fee P250pp - if you need to rent a snorkel and mask it will cost you P150pp. There are many people trying to sell you a similar boat tour but even though you may save a little it looks to be very very crowded. This marine park is definitely worth the effort to visit. Even though this hotel has its drawbacks, I think that it is a good place to base yourself for a few days and is of reasonable value.

This review is the subjective opinion of a Tripadvisor member and not of TripAdvisor LLC.
Fireguy137
164
Reviewed March 17, 2019 via mobile
Great location

We didn’t expect too much coming in to this hotel but liked a lot about it. It’s in one of the best locations and the rooms are comfy. Yah there’s a few quirks like the wifi being weak and the rooms not being cool enough, but sometimes I think people forget when they come to these countries it may not be up to our normal standards. I would recommend this stay if I had friends coming here.

This review is the subjective opinion of a Tripadvisor member and not of TripAdvisor LLC.
toolman9
Arkansas
102
Reviewed February 7, 2019
Unexpected change

Visited Hayahay five years ago. The clean rooms, friendly and helpful staff, and package rates (room, diving, and food) comparable to last visit. The dive shop is a lot smaller. All dives (five in total) were with five or fewer divers which I liked. Saw other dive parties further down the beach with over 20 divers on the boat. Equipment was very good and dive master accomidating as to what type of dive you wanted. Food at the restaurant was good but be careful when picking out your seafood. A lobster I choose was dated and the meat was to old. Prawns were the best and as good as I remembered them. The ambience of Alona Beach has changed from very international (european, south pacific, asian, some western) to almost all asian (korean, japanese, chinese) and three times as many people on the beach. Despite that, it is still a place to get away and experience the south pacific. Stayed five days, wish it was more.

Room tip: Hotel only has 11 rooms with only one facing the beach.
Ask toolman9 about Hayahay Resort
Thank toolman9