US$161
US$103
View deal
Hotels.comUS$140
PricelineUS$118
travelup.comUS$161
View all 18 deals
Prices are the average nightly price provided by our partners and may not include all taxes and fees. Taxes and fees that are shown are estimates only. Please see our partners for more details.
Sue G
Cincinnati, Ohio
104

My husband and I booked here for a 3 night stay in July of 2018. We had a Double Economy Room and did not choose to include breakfast. Our overnight flight from the USA ended up being cancelled, so I emailed them and was worried I would have to pay for the first night even though we could not make it there, but it turns out their cancellation policy allows cancellation up to 6pm on the day of your arrival. This came in very handy for us! We booked due to the location near the train station since we arrived and left via train. Our room faced the station and you could see a sliver of the lake. It was quite hot while we were there so we enjoyed having air conditioning. We enjoyed the cell phone they provided to use for navigation so we didn't have to use data on our own phones. We spent most of our time out and about and really only used the room to shower and sleep, but everything was comfortable and clean. I would definitely stay here again.More 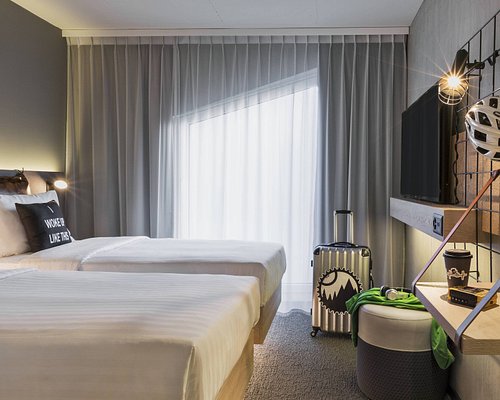 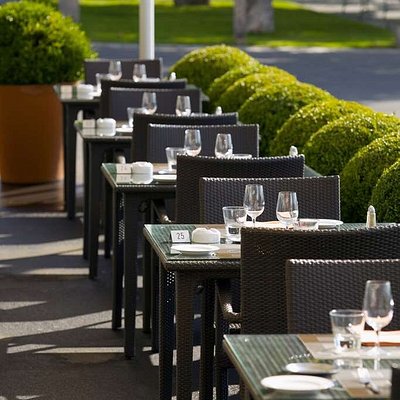 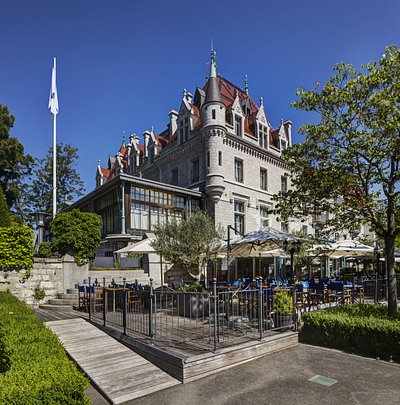 I was a little bit scared when I first saw it. Old type hotel in the middle of a huge building. Even the reception had a 80” look. They warned me that I was going to stay in one of the smallest rooms of the hotel emphasizing that they had bigger ones. I will take they word on that. The room was quite small. The bathroom even smaller. But everything was very clean and functional. Let me say that the service is five stars. The breakfast is fairly good. To compensate you have all kinds of amenities. A great gym working 24h, wifi, even a mobile assistant the allows you to make VOIP phone calls outside the hotel (I didn’t used it). One of the best parts is the location. Near the center, near the port and 30 seconds walk from the train station. As good as it gets.

This review is the subjective opinion of a Tripadvisor member and not of TripAdvisor LLC.
mark p
London, United Kingdom
121121
Reviewed 6 July 2018
Good choice

Stayed one night for business. Not great from the outside but location is superb, room was comfortable, good breakfast choice and really friendly staff. I would not hesitate to go back. Pizzeria next door is recommended as well.

This review is the subjective opinion of a Tripadvisor member and not of TripAdvisor LLC.
SubhamMukherjee1984
Lausanne, Switzerland
1555
Reviewed 4 July 2018
A great place to stay

This is a great hotel to stay.
Amenities are fine. The hotel provide a local pass to travel within the city with local transport(second class).

The hotel get its main thumb ups for its Location and very friendly stuff.

This review is the subjective opinion of a Tripadvisor member and not of TripAdvisor LLC.
LazyL_13
London, United Kingdom
252141
Reviewed 30 June 2018 via mobile
Small and forgettable rooms, couldn’t get soap out of the dispenser

Arriving late to my hotel, the location was fine but from there my experience went downhill. This hotel claims to be 4-Star but has a lift that looks like it was built in the 1960s. My room was small to the extent that as I squeezed past the bed to get to the bedside table I bashed my toe on the hard square leg of the bed. I measured the gap at just a bit longer than a sheet of A4. Why couldn’t they buy a bed with recessed legs or rounded legs? Either would have been less likely to cause injury. Maybe it’s because the bed itself is so small that to have the legs any further in would risk having the bed capsize at the slightest deviation from being the middle of the bed. Bathroom? Would have been a whole lot better if the squeezy soap jars released some liquid soap. A solid bar of soap, given the price of the room, would have been welcomed at 11 pm last night; I really didn’t feel like calling a technician and waiting to get it fixed. Oh, but the bathroom has a paper sash across the toilet explaining in 4 languages that the toilet has been sanitizer! I hadn’t seen one of these in probably 20 years so either this hotel has taken all the world’s remaining quadrilingual toilet sash declarations or they are at least 20 years behind in their concept of service. Breakfast? Didn’t bother; went straight to Le Pain Quotidien to get something that might be predictable but at least reliably 21st century.

This review is the subjective opinion of a Tripadvisor member and not of TripAdvisor LLC.
Jane M
Hackensack, New Jersey
15444
Reviewed 4 June 2018 via mobile
Nice hotel near the train station

If you come to Lausanne by train, this hotel is well located, just across the street. It is also very close to the metro line, which helps a lot as the city is all hills. Our room on the fifth floor had a view over the station, of the lake and the mountains. The staff are friendly and helpful and breakfast is very good.

Thank you very much for your so positive feedback, following your recent stay in our Hotel. It will be a great plaesure for us to welcome you back in a next occasion, and in the meantime, please accept our best regards

Report response as inappropriateThank you. We appreciate your input.
This response is the subjective opinion of the management representative and not of TripAdvisor LLC.
View more reviews
PreviousNext
1…789…