US$93
US$61
View deal
Hotels.comUS$85
PricelineUS$93
TravelocityUS$85
View all 17 deals
Prices are the average nightly price provided by our partners and may not include all taxes and fees. Taxes and fees that are shown are estimates only. Please see our partners for more details.
diversetraveller220
Canada
3835

Palermo is a vibrant city. This hotel is located on a pedestrian commercial street. Restaurants, bars and shops are all on your doorstep here. A grocery store is around the corner. A five minute walk takes you to the harbour where you can walk along in both directions. Good A/C and good shower in my room, which are my necessities in addition to location.More

Dear Sirs,
thank you for your good review and we are glad that you loved Palermo and your stay.
It will be a plaesure to see you at your next journey in Sicily.
Thank you once again
Best Regards

Report response as inappropriateThank you. We appreciate your input.
This response is the subjective opinion of the management representative and not of TripAdvisor LLC.
See all 1,582 reviews
Nearby Hotels 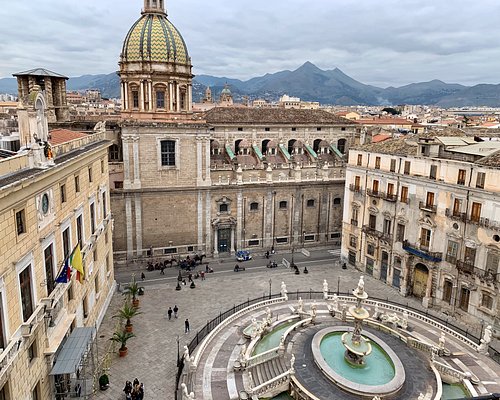 Breakfast included
Sponsored
B&B Amarillo
US$97
Booking.com
View deal
Free cancellation
Expedia.com
US$100
Agoda.com
US$71
Hotels.com
US$100
View all 12 deals from US$71
40 reviews
We compared the lowest prices from 12 websites

Taking safety measures
We compared the lowest prices from 15 websites

Breakfast included
Hotel Politeama
US$100
Booking.com
View deal
Reserve now, pay at stay
Expedia.com
US$93
FindHotel
US$90
Trip.com
US$122
View all 17 deals from US$90
312 reviews
1.3 km from Hotel Palazzo Sitano

Light challenged is not only issue with this hotel. Don't expect smiles or greetings when you check in. Our first room had fan but no ac. Only rooms with ac have mini split. No central air. Strange layout. Did I mentioned very dark? One positive was well located. Can probably do better for the money.

This review is the subjective opinion of a Tripadvisor member and not of TripAdvisor LLC.
ChrisA3274
Chudleigh Knighton, United Kingdom
5639
Reviewed 6 October 2019 via mobile
Great position

Clean and friendly, the hotel is in the centre of life in Palermo. The street outside and those around are filled with places to eat and drink and stalls selling goods and Sicilian street food. On Saturday night they were full of people just walking around or enjoying the local food and drink and the atmosphere is really enjoyable.
Our room overlooked the street and a background noise existed until gone 01.00hrs as people were still enjoying the atmosphere (I saw more than one couple with a pushchair at this time) but this did not stop us from sleeping when we turned in. The breakfast was plentiful but not really that good but there are plenty of places outside where you can eat for a reasonable price.
As ever in Italy remember to take a kettle and coffee/tea as they are not in the room.

Dear Chris,
thank you for for review.
Regarding the kettle is not provided in the rooms but is on request.
If you had requested it we would have brought her the kettle in the room, with cups, water and tea and herbal teas for free.
Kind regards

Report response as inappropriateThank you. We appreciate your input.
This response is the subjective opinion of the management representative and not of TripAdvisor LLC.
Pearl65
Hampshire
366206
Reviewed 2 October 2019
Very dark rooms

We were part of a tour so this hotel was chosen for us. To be fair we were warned about the dark rooms & it wouldn't be a deal breaker to us but there's really no excuse as all they needed was a decent central light. There were very few sockets for charging either. The rest of the hotel wasn't as poorly lit & the decor was modern & to my taste.
The bathroom was Ok but a little compact as the door would hit you if you were standing at the wash basin. There was a spacious walk in wardrobe with a safe.
We had back rooms so they were very quiet as the location is great, on a main street. Consequently everything was easily walkable including the harbour, main attractions & restaurants.
The wi-fi was unsecure but stable.

Dear Guest,
thanks you for your review.
We regret to read that his room was dark but being an ancient building we did our best to maintain the antiquity of the structure and the modernity of the room.
Kind regards

Report response as inappropriateThank you. We appreciate your input.
This response is the subjective opinion of the management representative and not of TripAdvisor LLC.
Dorothy B
12
Reviewed 22 September 2019
Titan Tour

Good location, but nothing much else going for it - we had a large suite of rooms, but it was so dark you needed lamps on in the day and there was no overhead lighting. On the first night we reported a blocked shower, basin and air conditioning not working. The shower was unblocked the next day, the basin remained blocked and the air conditioning was not fixed, instead a large extremely noisy fan was placed in the sitting room area, blowing into the bedroom. Another couple in our group reported no air conditioning and were moved after one night. However they could not access their room after breakfast on the day of departure as their key card was not working. Breakfast was average, hotel is in central location, but I would not stay there again and it should be removed from Titan tours.

Room tip: Just don't go there if you can avoid it.
Ask Dorothy B about Hotel Palazzo Sitano
2  Thank Dorothy B

This review is the subjective opinion of a Tripadvisor member and not of TripAdvisor LLC.
MadCookKath
Sydney, Australia
12056
Reviewed 21 September 2019 via mobile
Exceptional stay

If you want something that has it all, then this is the place stay. Staff exceptional, rooms great and breakfast selection vast. You can't go hungry here. Every day something different. You can use this place as base and travel around. I place I would some back to.

Thank you for choosing our accommodation facility.
We hope to have you back as our guest soon.
Thank you
Best Regards