US$222
US$117
View deal
Expedia.comUS$123
PricelineUS$128
travelup.comUS$222
View all 16 deals
Prices are the average nightly price provided by our partners and may not include all taxes and fees. Taxes and fees that are shown are estimates only. Please see our partners for more details.
581fionab
1523

Hotel was good and very clean with many good restaurants on doorstep not too far off Via Roma but very quiet for a sleep which was welcome.

Room was immaculate, bed slightly too hard for me, pillows fine but the maid's made sure your room was spick and span every day.

Breakfast a bit boring as was same every day, only ate once in the hotel restaurant as there were many choices round and about. Drinks at the bar pricey so just as well we didn't want more than 1.

The staff were interesting and very varied, some helpful some less so, but if you need somewhere to stay short term it would be a good place to go.More

Show less
Room tip: Choose a bigger room the classic is quite small

Dear Guest,
thank' s for writing about The Grand Hoel Piazza Borsa.
Thank' s also for appreciating the quality of our services in general, especially that of the bed and pillows, a very important service for us.
We hope to see you again at the Grand Hotel Piazza Borsa.
Giovanni Pizzo
General Manager

Report response as inappropriateThank you. We appreciate your input.
This response is the subjective opinion of the management representative and not of TripAdvisor LLC.
See all 913 reviews
Nearby Hotels Breakfast included
Sponsored
Ibis Styles Palermo Cristal
US$79
Booking.com
View deal
Free cancellation
Expedia.com
US$83
ZenHotels.com
US$70
Hotels.com
US$83
View all 16 deals from US$70
761 reviews
We compared the lowest prices from 16 websites 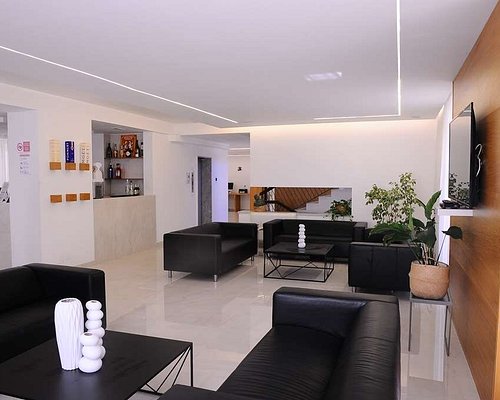 Taking safety measures
We compared the lowest prices from 14 websites
NH Palermo
US$109
Booking.com
View deal
Reserve now, pay at stay
Expedia.com
US$109
Destinia.com
US$95
NH Hotels
US$109
View all 18 deals from US$95
1,868 reviews
0.8 km from Grand Hotel Piazza Borsa

This beautiful hotel is in a safe location walking distance to everything. We had room 339 with a king bed and huge terrace. Nearby is the best street food place in town where we got takeout and ate outside on our private terrace. The rooms are each different. We loved ours.

Dear Guest,
your beautiful words about the Grand Hotel Piazza Borsa give us the right energy to always do the best.
We have many rooms with private terrace with bathrooms with jacuzzi tube, many guests love to describe our hotel romantic,quiet and very close the center.
Thank' s again!!!
Giovanni Pizzo
General Manager

Report response as inappropriateThank you. We appreciate your input.
This response is the subjective opinion of the management representative and not of TripAdvisor LLC.
mk21054
Punta Gorda, Florida
16163
Reviewed 15 November 2019
smelly room uncomfortable bed

this hotel has a great location for walking anywhere in old city palermo , restaurants and the waterfront...... but our room had no window.... had a disgusting smell, and i thing we slept on the boxspring with no mattress!! no no ! i'm sure there are much nicer hotels to stay with awesome locations too.... also the food and the waiters are miserable

Dear Guest,
we were surprised to read your review, sorry if we have not satisfied your expectations.
We inform you that all our rooms have balconies and windows, and in many rooms also terraces...
We are sorry for the unconfortable mattress, which we have replaced, as we periodically do.
Thank' s for your opinion and hope see you again to offer you a unforgettable stay.
Giovanni Pizzo
General Manager

Report response as inappropriateThank you. We appreciate your input.
This response is the subjective opinion of the management representative and not of TripAdvisor LLC.
Rex06
Melbourne, Australia
335152
Reviewed 29 October 2019
A good base for the first six nights of our tour

The first thing that we noticed was its position in the Old Town of Palermo located as it was between the Royal Palace and the harbour. As we were on a tour of historical and archaeological sites it was perfectly located. It seems from diagrams upstairs in the hotel that it had once been a Palace and/or a convent, or both. Consequently it was large with rooms around the large courtyard which could be closed to exclude the elements.

Initially, we found the breakfast buffet to be large but to be quite basic for a hotel of its apparent class: fruit juice drink,not fruit juice and limited hot items, until we found that we could get freshly squeezed Orange juice and individually cooked items, which made a great difference.

Fortunatel for us, sufficient numbers of the staff spoke English, as our Italian was awful.

Room tip: Our room faced a small street which was always quiet; I suspect all others are similar
Ask Rex06 about Grand Hotel Piazza Borsa
3  Thank Rex06

Dear Guest,
thank you for writing your opinion about our hotel. We are really happy that you appreciated our location, in the heart of the city and above all the charm and the history of the Grand Hotel Piazza Borsa.
Thank' s also for appreciating our rich breakfast, with the great offer of food and drinks.
Looking forward to seeing you again, we send you our best regards.
Giovanni Pizzo
General Manager

Report response as inappropriateThank you. We appreciate your input.
This response is the subjective opinion of the management representative and not of TripAdvisor LLC.
C1719TXscottt
Sharon, Massachusetts
811
Reviewed 28 October 2019
Palermo Delight

This hotel is in a converted bank which includes a grand lobby/open atrium. The location is fantastic. It is a 3 minute walk to Piazza di Marina, 6 minutes to Quattro Canto. You can walk throughout the old city from the hotel. Our room (339) had a lovely balcony. Breakfast is good and the staff is very attentive. Roberta and Leonardo at the front desk we’re unbelievable - gracious and helpful. They recommended two nearby restaurants including Quid. They also arranged a car to get to the airport which was very reasonable. This is the place to stay.

Dear Guest,
we are very happy to know that your stay was enjoyable.
Thank' s for remembering the story of the Grand Hotel Piazza Borsa, located in the heart of Palermo, is a unique building composed of three adjoining structures: The Cassa Di Risparmio of 1900, a convent and church of Padri Mercedari Scalzi of 1500 and Palazzo Briuccia- cattolica of 1600, the union of three great epochs.
Thank' s also to write about the availability of our staff, usually kind and professional.
Sure to see you again, best regards.
Giovanni Pizzo
General Manager

Report response as inappropriateThank you. We appreciate your input.
This response is the subjective opinion of the management representative and not of TripAdvisor LLC.
Jlegg25
Brisbane, Australia
711
Reviewed 27 October 2019 via mobile
Lovely hotel, Great location

We stayed here as it was the starting point for our Sicily tour. The hotel is in a great location and has a lovely courtyard area for relaxing in. Breakfast was included and there was a great range of food.
Would definitely recommend this hotel.