US$69
View deal
Lol.travelUS$70
Hotels.com
Travelocity
View all 10 deals
Prices are the average nightly price provided by our partners and may not include all taxes and fees. Taxes and fees that are shown are estimates only. Please see our partners for more details.
gaynor p
standish
5462

This hotel probably won't be for everyone but if you need a central affordable hotel, clean rooms, super comfy beds, friendly staff and a adequate breakfast then you can't go wrong. Little things let this hotel down, but we reported them to reception and hopefully they'll be rectified. Breakfast gets a few folk worked up, yes there isn't a massive choice, but what's put out is fresh and if you want anything topping up just ask the staff. The hotel is situated on a small road that is still undergoing major building works, and as of such will put people off, not the noise, but the scruffy way the via is left after the builders have gone. But being honest your not paying a five star bill to stay here, so keep that in mind. The location sells this place hands down, never stayed anywhere so central for everything, and if given the choice we will definitely return xMore

Hotels.com
View deal
Trip.com
US$92
Destinia.com
US$54
FindHotel
US$93
View all 17 deals from US$54
744 reviews
We compared the lowest prices from 17 websites 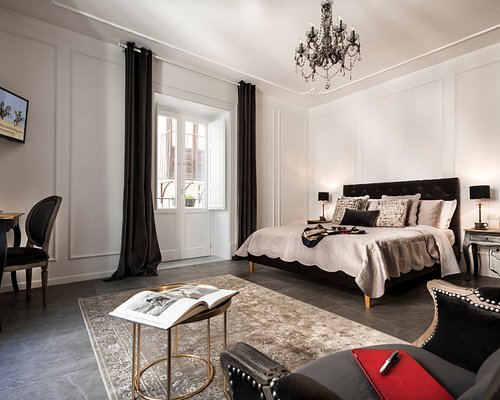 Breakfast included
Hotel Politeama
US$137
Booking.com
View deal
Reserve now, pay at stay
Expedia.com
US$128
Destinia.com
US$105
Trip.com
US$142
View all 18 deals from US$105
254 reviews
1.0 km from Hotel Columbia Palermo

Taking safety measures
We compared the lowest prices from 17 websites
Breakfast included
Mercure Palermo Centro
US$142
US$138
Booking.com
View deal
Free cancellation
Expedia.com
US$138
Hotels.com
US$138
ZenHotels.com
US$142
View all 17 deals from US$138
2,296 reviews
0.8 km from Hotel Columbia Palermo

Taking safety measures
We compared the lowest prices from 18 websites
Villa Igiea
US$960
Booking.com
View deal
Free cancellation
Reserve now, pay at stay
Expedia.com
US$957
Destinia.com
US$527
Hotels.com
US$957
View all 17 deals from US$527
7 reviews
3.3 km from Hotel Columbia Palermo

This review is the subjective opinion of a TripAdvisor member and not of TripAdvisor LLC.
Jasonleg
Cape Town Central, South Africa
395207
Reviewed 22 September 2019 via mobile
Great service from Nicola

Drove to the hotel from airport and were lucky to find a parking near the hotel entrance on a side street. We were warmly welcomed and taken to our rooms by Nicola, a very polite and kind gentleman. The rooms are big and the bathroom was functional. Appreciate the breakfast served in the morning with great cappuccino’s. Nice to be so centrally located so access to markets, or opera house is easy. A great stay.

This review is the subjective opinion of a TripAdvisor member and not of TripAdvisor LLC.
Mary C
berkhamsted
915
Reviewed 20 September 2019
Great location and good value for money

We stayed in Hotel Columbia for four nights and used it as a base for sight seeing and strolling the streets of the historic centre. It has a superb location, so handy for Via Maqueda and Via Vittorio Emanuele (via one of the city’s many narrow little alleyways) and all the places we wanted to visit were within easy walking distance. We could also go back in the afternoon to cool off when the weather was really scorching!
The room was quiet and had efficient air con which was much appreciated. There was plenty of hot water and loads of towels. The room was cleaned regularly. We would have liked a few more hangers in our wardrobe, but apart from that it was excellent.
Breakfast was fine, but a little more fresh fruit would have been nice.
The staff were fantastic, especially the reception desk staff who gave us helpful advice and information.
All in all, we were very pleased with our choice of hotel, which we felt was reasonably priced and we would definitely recommend it to others and return there ourselves.

This review is the subjective opinion of a TripAdvisor member and not of TripAdvisor LLC.
FussyMcB
Lancashire
4866
Reviewed 7 August 2019
Nice Little Place

This is a nice little hotel in a lovely old building with very pleasant staff. The rooms are small but comfortable and the bathrooms are serviceable. There are no lifts and due to the nature of the building the staircases are kind of split up and you have to meander down corridors to find them. The breakfasts are basic but adequate but as Scicillians make fabulous cakes you can easily top up your energy levels at some of the gorgeous pastry shops anyway. The hotel is down a narrow street and many of the buildings around it are being refurbished so you do get the impression the area is a but rough. This is definitely not the case, it is two minutes from the main street were there are loads of bars and lovely restaurants and it is only a short walk to the main attractions of Palermo.

This review is the subjective opinion of a TripAdvisor member and not of TripAdvisor LLC.
Jane B
Lincoln, United Kingdom
3143
Reviewed 12 July 2019
Perfect Hotel!

This was just what we needed for three nights in Palermo... me, my friend and her 24 year old daughter shared a triple room. Scrupulously clean, wonderful staff, good aircon and hot water, and it was so close to the centre. All this and amazing value for money too! Would definitely recommend.