Do not book with these scammers - Alexander Apartments

Do not book with these scammers

Do not book here me and my friends went down to celebrate one of our birthdays and when we were already on the bus down to Newcastle I received a message saying that the apartment had been cancelled as we weren’t old enough as we had to be 26. They then said we can have a full refund and it has now been almost 2 weeks of back of contacting Booking.com and they aren’t replying to any of their emails or phone calls and have also deleted the messages they sent me to try and act like they didn’t offer me a refund. so I will now be taking legal action against them. Everyone who works here should be ashamed of them selves for scamming innocent people of their hard earned money.More 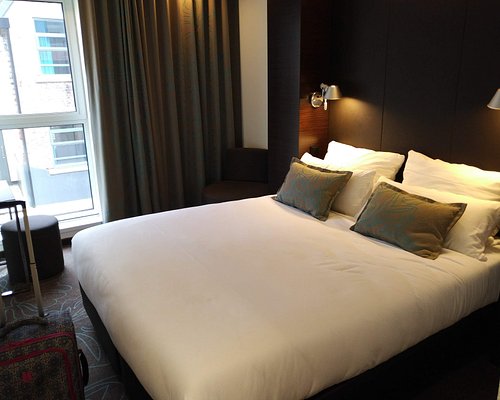 Absolutely shocking customer service, was on our way down to newcastle from Edinburgh when the owner of apartments phoned 2 hours before check in saying there had been a problem the night before with the apartment and it was not suitable for us to stay in however he would try find us an alternative apartment, when we arrived in newcastle we had heard nothing back so tried phoning again however this time he didn’t answer. When the owner did answer he was extremely rude and said he was relaying on another booking not showing up. He told us we wouldn’t get a refund when the property cancelled on us!!! Still haven’t had a refund. Property are calling us liars when there was 5 people in the car who heard the phone call! Absolutely disgraceful customer service!!! SCAM ARTISTS

This review is the subjective opinion of a Tripadvisor member and not of TripAdvisor LLC.
Nat_Jane_S
11
Reviewed 19 August 2021
THE WORST KIND OF SCAMMERS

I had booked a 3 bedroom apartment at the Quayside for my mums birthday and brought my 8 year old son along too. We did not receive check in details on the morning as promised in the booking confirmation and I had to call them at 12pm to request an early check in as we had been walking around with our luggage for a while and wanted to find out what was happening. The director called us back and advised the apartment I booked was no longer available (had I not called, who knows when I would have been informed) and was offered a one bedroom apartment or 2 separate studio apartments. Not wanting to be separated, we opted for the one bedroom as we had nowhere else to go and continued to wait and wait and wait for check in details. Walking around the streets with our luggage with no clue where we were going, I tried to call and call and left several messages to no avail. Eventually, at 15:30 (30 mins after check in) I received a text message to inform the cleaner had been running late but the apartment was now ready and text over an address. Jumping in a taxi, we were driven out of the city centre to a place even the taxi driver said was a "rough neighbourhood". Having to wait for the cleaner to return as she had left, we were eventually let in the gate and taken to the apartment. I say apartment but it was really a flat more than anything else. Immediately hit by the stench of urine, we thoroughly checked out the flat which was absolutely filthy and disgusting. We had 2 towels to last 4 nights and the bathroom door had to be wedged shut. I have taken multiple photos of the flat and there was even personal mail in one of the drawers for an individual. I decided there and then that we could not stay in this run down "apartment" and I immediately requested a full refund but was thoroughly ignored. We headed back to the city and tried in vain to find another place to stay with no luck. On Booking.com I saw an apartment that was available and in my haste to find a place for us to stay, paid a further £167 to an apartment complex on the site and to my absolute horror realised it was the same company!!!! I cancelled immediately and was given a £5 refund. Cutting our losses at 8pm, we decided to head home and end our holiday on the first night. My little boy was absolutely devastated. We did not arrive back home until after 1am!! I have not received my safety deposit back either. AVOID AT ALL COSTS

This review is the subjective opinion of a Tripadvisor member and not of TripAdvisor LLC.
fabbydabi
Fife, United Kingdom
1016
Reviewed 18 August 2021
Scammer alert !!!!

Friend booked one of these apaerments for a 4 night stay with her 2 young children. This is a scam. Do not book these apartments.

She was left on the streets in a bus shelter with luggage and 2 small children and promised by the staff a key code for an apartment. These are run down flats that are filthy.

CHRISTOPHER SPENCE YOU ARE A DISGRACE !!!!!!!

This review is the subjective opinion of a Tripadvisor member and not of TripAdvisor LLC.
X6317QPangelah
11
Reviewed 15 August 2021
Don’t book !!!! They are scammers

We arrived to be told they had double booked us , after 2 hours they finally got back to us with another apartment miles away from were we had booked. When arriving at the other apartment the key code was wrong and had to wait half hour for another code . Once in the building, we turned around and walked straight back out ! Two guys were arguing and quite openly using drugs and drinking beer , one of the guys threw and smashed a bottle against a wall . We phoned the company and told them and they just wasn’t interested! I have now taken legal action against them as we are still waiting for our money back ! This company should be closed down , they are nothing but scammers !

This review is the subjective opinion of a Tripadvisor member and not of TripAdvisor LLC.
leonam838
2
Reviewed 7 August 2021
Disappointed! Management awful.

My family and another stayed at the Alexander apartments on Jubilee Road. Check in was supposed to be 3pm but we were left waiting 2 hours with 6 kids between us for a code for the key box. Customer service couldn't give us the details and told us on numerous occasions someone would get back to us which they didn't. After several hours of phoning we eventually get a whats app message.
So...We finally get into the apartments and there are 2 towels for 4 guests and not enough bed sheets, duvets to consider 4 guests. There was also not enough cutlery, mugs etc to accommodate 4. We ended up sharing items between the 2 apartments. One of the hobs wasn't working at all in one of the apartments and the floors were dirty.

It's actually very sad because these apartments have the potential to be very good if managed properly however it appears the owner doesn't give a damn about guest satisfaction, only taking their money.

Thankfully no one got in touch to take the so called £300 deposit from us as having read other reviews people are not getting it back.

Unfortunately we will not return again and i would certainly not recommend.

This review is the subjective opinion of a Tripadvisor member and not of TripAdvisor LLC.
View more reviews
PreviousNext
123…
<scrip