Expedia.comUS$34
Hotels.comUS$34
Trip.comUS$38
View all 16 deals
Prices are the average nightly price provided by our partners and may not include all taxes and fees. Taxes and fees that are shown are estimates only. Please see our partners for more details.
U1113OB_
88

The location was pretty nice. The people in the reception were friendly and made you feel at home. They also gave us a lot of information about the island. The services were really bad. The woman who cleaned our bathroom hadn't have put cleaned towels
and new foam for bath, so we had to ask our own. At the bathroom the ventilator wasn't working so it smelled badly.
The air conditioning wasn't working immediately after turning it on. Also there were other stuff from previous visitors . Although we made reservations without including breakfast they offered it with no extra charge. The breakfast was really delicious. Especially the coffee.

Trip type: Traveled as a couple
See all 123 reviews
Nearby Hotels 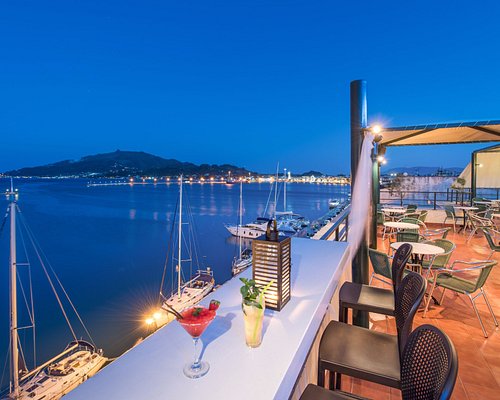 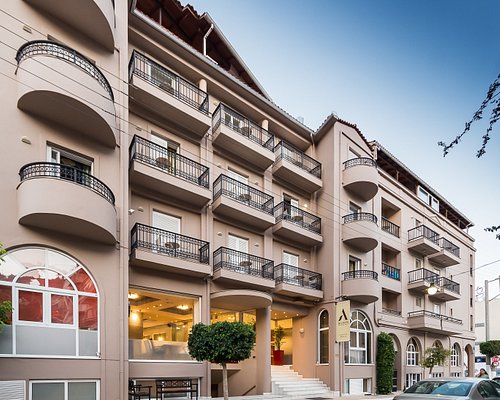 Nice breakfast which is open from 0730 in the morning. Comfortable beds and rooms which are air conditioned. Small lift available to take heavy items to other floors. Wi-Fi is available at reasonable speeds. May get signal strength issues in some parts. Centrally located in Zakynthos Town and parking is available on the main road only 50-100m away but need to park before 1900 otherwise it may be difficult to get a park.

Room tip: Park the car on the main road prior to 1900 or it may be difficult to get a park.
Trip type: Traveled as a couple
Ask 421simonw about Yria Hotel
Thank 421simonw

This review is the subjective opinion of a Tripadvisor member and not of TripAdvisor LLC.
Maggie B
Vienna, Austria
114
Reviewed 16 November 2020
Would NOT stay there again

I had a room directly opposite private apartments. There was a nutter making a loud monotonous noise every day whenever I was in the hotel. It could not be called music by any stretch of the imagination. In the end I complained to reception. Nothing was done so one night I turned the TV up loud to drown out the row. Then someone from the block opposite complained, perhaps because it was a Turkish soap opera with Greek subtitles. The owner was very unfriendly. He came up to my room and shouted at the nutter opposite who promptly threw a bucket across onto the balcony. The owner threw the bucket back but it missed and fell into the courtyard below. I threatened to call the travel representative based in Corfu, believe it or not. It was through only the intervention of the young lady in the breakfast room that I was eventually offered a different room, much further back. I could still hear the noise, but as it was much farther away it did not bother me. Basically, they wanted to sweep the issue under the carpet and even though the hotel was virtually empty, they showed great reluctance to resolve the issue.
Plus points: not far from the centre of town, i.e. convenient location. Good wifi. It would not have been so bad if it had not been for the nutter although the owner was unfriendly too. I have had far better experiences of Greece than this.

Room tip: Noisy at the back of the hotel because of the nutter, noisy at the front due to the traffic
Ask Maggie B about Yria Hotel
Thank Maggie B

This review is the subjective opinion of a Tripadvisor member and not of TripAdvisor LLC.
Mike S
London, United Kingdom
12024
Reviewed 2 October 2019
Small rooms let this place down.

The hotel is well placed in Zante town and near to many restaurants.
Our room was small to the extent that I had to bend to pass between the wall-mounted television and our bed. The bathroom too, was cramped. The room appears austere at first sight but look a little closer and you will see that it is down to colour choice rather than fittings, which were all of a good quality. We had a Juliet balcony overlooking the moderately busy street: in all honesty, you would not want to linger.
No complaints about the breakfast which was varied and ample.
I thought the price high for what we got... but the end of July is high season. Looking at the deals offered at the start of October, it looks better value.
I wouldn't return.

Room tip: Ask for a big one, if they have one.
Ask Mike S about Yria Hotel
Thank Mike S

This review is the subjective opinion of a Tripadvisor member and not of TripAdvisor LLC.
Claire S
Perth, Australia
164
Reviewed 16 July 2019 via mobile
Good spot, great breakfast!

This little hotel is in a good spot, you can walk the length of the port promenade right up to where the ferry departs from. In the other direction a small, pebble beach and steps into the crystal clear waters - it is extremely clean water for being so close to the port. I swam at the steps at the end of the hotel road, water was awesome.
Breakfast fab, rooms small but all you need for a shower and sleep.
Staff friendly once you get talking to them and smile and be friendly.
I'd definitely stay again.

This review is the subjective opinion of a Tripadvisor member and not of TripAdvisor LLC.
Pete27_10
Manchester, United Kingdom
10192
Reviewed 8 June 2019 via mobile
Great hotel with friendly helpful staff.

I stayed here 4 nights and was blown away by the greatness of this hotel. Tastefully decorated with friendly helpful staff and very clean with good facilities. Air con, safe as standard and the breakfast was amazing choice with cooked food as well as continental and scrambled and fried eggs and bacon was really tasty. Also just a 5 minute walk to town so perfectly situated for everything. Lifts to all floors so good for disabled access. One of the best hotels I have ever stayed for low price. Excellent.