Expedia.com
Hotels.com
eDreams
View all 15 deals
Prices are the average nightly price provided by our partners and may not include all taxes and fees. Taxes and fees that are shown are estimates only. Please see our partners for more details.
MollieBo
Georgetown, Canada
2410

Great place to stay in Calamba

Great place to stay when in Calamba. Very new, clean and cozy. Staff is very friendly always offering greetings. Near the freeway for easy access to and from daily excursions. Only about an hour from Manila. 7-11 across the street. Jolibee and other restaurants nearby. Cafe in hotel had really good breakfast. Nice pool but I was unable to use it. Only downfall is the hallways lack soundproof materials so activities in the hallway are amplified. Very quiet at night but mornings can be noisy if you plan to sleep in. Suggest earplugs. I will actually miss this little gem.

Trip type: Traveled as a couple
See all 6 reviews
Nearby Hotels 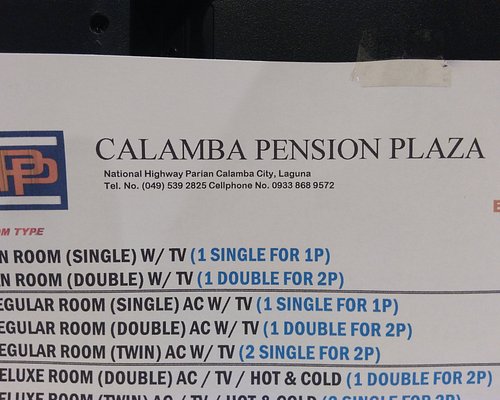 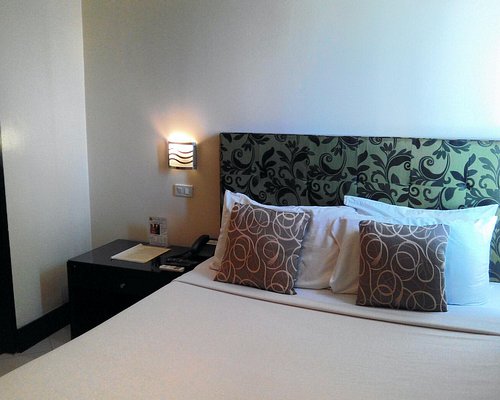 The Green Glass Boutique Hotel
US$31

Agoda.com
View Deal
Free cancellation
Reserve now, pay at stay
Tripadvisor
US$31
Trip.com
StayForLong
View all 5 deals from US$31
28 reviews
4.1 km from Hotel Marciano
We compared the lowest prices from 5 websites
Astrotel
US$26

Expedia.com
View Deal
Pay up to 12X
Hotels.com
US$28
FindHotel
US$18
Hurb
US$26
View all 13 deals from US$18
1 review
1.6 km from Hotel Marciano
We compared the lowest prices from 13 websites
Rjat Guesthouse
US$37

Expedia.com
View Deal
Free cancellation
Pay up to 12X
Booking.com
US$22
Agoda.com
US$16
Hotels.com
US$37
View all 11 deals from US$16
0 reviews
3.6 km from Hotel Marciano
We compared the lowest prices from 11 websites
Top Rated
Hannah's Garden
US$51

Hotels.com
View Deal
Booking.com
US$26
Agoda.com
US$19
eDreams
US$26
View all 13 deals from US$19
2 reviews
2.2 km from Hotel Marciano
We compared the lowest prices from 13 websites
Sponsored
The Green Glass Boutique Hotel
US$31

Expedia.com
View Deal
Free cancellation
Pay up to 12X
Hotels.com
US$47
Agoda.com
US$35
Booking.com
US$58
View all 13 deals from US$35
33 reviews
1.8 km from Hotel Marciano
We compared the lowest prices from 13 websites
Hotel Turista Canlubang
US$72
US$46

I stayed at this hotel the previous week and booked online.

Refused to give me the same rate as previous on walk in, and wanted full rack rate. I offered to book online in front of them and was met with a scornful reply “ok Sir”.

Couldn’t be bothered so went elsewhere for the night.

This review is the subjective opinion of a TripAdvisor member and not of TripAdvisor LLC.
Arubertu
Breda, The Netherlands
435
Reviewed 12 July 2018 via mobile
Relax and sports

A nice comfortable hotel in a quiet location. Rooms are nice with coffe and the toothbrush etc. good WiFi and lots of television channels. Airco can’t cool enough sometimes sweetly in the room. Kind staff. Pitty breakfast isn’t included but maybe it’s better. 300 peso for two sausages and rice is to much! Hotel construction isn’t finish yet and that’s a pitty ( no gym and one floor is completely under construction. What me annoy most is the terrible high extra tax cost. I payed for 5 nights 286,00 euro and additional 51.00 euro tax!!! It’s daylight robbery! Travelled the world and never seen such high costs! It’s a way of making extra money and that’s a pitty. So it make this very good looking hotel and staff just a middle one.

This review is the subjective opinion of a TripAdvisor member and not of TripAdvisor LLC.
EnjoyLifePam
Quezon City, Philippines
4354
Reviewed 10 May 2018 via mobile
New hotel just 2mins away from Calamba exit

Cons:
-small pool
-hotel restaurant has limited food choices and is not even appealing to try
-the room floor is still dusty
-no other amenities
-some part of the bldg is still under construction so expect a little noise

This review is the subjective opinion of a TripAdvisor member and not of TripAdvisor LLC.
Jimholms
Singapore, Singapore
1410
Reviewed 17 March 2018 via mobile
New hotel, limited amenities ..

Certain parts of the Hotel were still in the midst of construction during my stay from 12-16 March 2018. Within the hotel, there are a Korean restaurant, a cafe ( Bilkish Cafe) , a hair salon and a Korean Mini-mart.
Hotel is right behind a petrol kiosk (Petron Real). Plenty open air car park lots just outside hotel. There is a 7-11 opposite a busy road and a Jollibee outlet next to it. Other than that, only some local eateries nearby which I had not tried so will not comment on that. Nearest mall is SM Calamba which is about 1.5km away. Taking a trike cost P50 per trip but I supposed if you are not lazy to haggle like me, probably P40 may be enough..

Front desk seemed understaffed, and they also seemed rather clueless and not familiar with their own hotel. For the benefits of doubt, just to be fair, it could be the hotel is still new and they are not fully settled in as yet. The staff were mostly very polite and friendly though.

The room is rather small with the bed almost touching wall to wall. For a single business traveler like myself, i was not really bothered but not sure if it will be a problem if there are more people in the room.
I travel to Phil about once a month or two and had stayed in many hotels but the bed and pillows in Marciano has got to be the best for me so far. They were very comfy and provided a much needed rest for me.
Bathroom was also clean and well laid out. One thing that bothered me was the water heater and pressure. The water took a long time to heat up, that I thought was not working at all and had to request the house keeping guy to come fix it. By the time he came, the water already turned hot.... So what I had to do after that, was to turn on the water 5 minutes before my shower to let it heat up first. It is really a waste of water but if you are someone who needs at least a warm shower, there is not much of a choice.. Perhaps the hotel can work on the thermostat setting to speed up the heating and reduce the wastage of water.

Wi-Fi connection in my room was good. Connection was a breeze and I did not experience any issue at all. For business traveller like myself, connectivity is critical so that was a huge plus for me. One thing weird I notice though was that there were no power point at the table where the laptop will be. There was a hair dryer and a safe in the room as well. Air-con was working well, quiet and powerful. TV was good as well, a wide selection of channels with good reception.

Saw the sign there was a gym but did not check that out. Woke up earlier one morning to try the swimming pool though. It was nice for a morning dip but not really for swimming as it is rather small... A few waddles and you are at the other end.

Wanted to try the breakfast but the restaurant was dark and looked non operational. Checked with the staff and they only had a few items on a small piece of paper as menu.. The Bilkish cafe was still closed by the time I was ready to leave for the day. Did not have many options so out of my 5 days there, breakfast was a daily affair at Jollibee.

Verdict:
New hotel with small but clean room, good Wi-Fi, air-con and comfortable bed. Location is rather far from malls and supermarkets. Will be ideal for business travellers who have own transport arrangements and just need a room to rest the night away. Will consider coming back if there is a promotional rate, otherwise may probably choose other hotels with better locations.

This review is the subjective opinion of a TripAdvisor member and not of TripAdvisor LLC.
Imee I
Luzon, Philippines
1513
Reviewed 13 February 2018 via mobile
3day conference

This hotel is relatively new so the rooms are still in good condition, nice and tidy. Well spaced rooms with soft pillows and linens. Hotel staff are polite and courteous. BUT, the food is terrible! We cannot even stand to eat the boneless bangus dahil amoy hampok and makati sa dila.. ugh! Considering that we had the meals changed from chicken adobo na hindi rin makain. We opted to eat outside since its very near jolibee. For its price? It not worth it. They shoud improve their food service because room rates ranges from 5k-8k per night. And they should serve their guest with good food if not the best.

This review is the subjective opinion of a TripAdvisor member and not of TripAdvisor LLC.
View more reviews