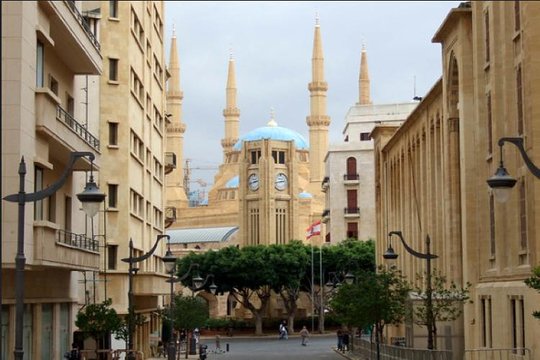 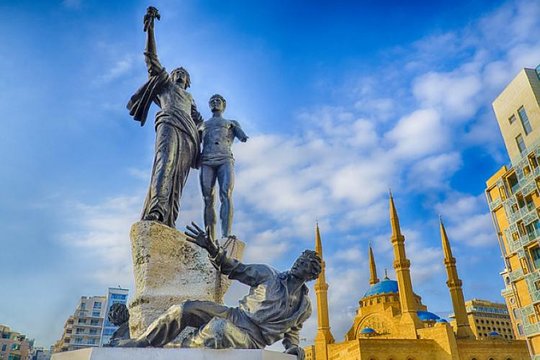 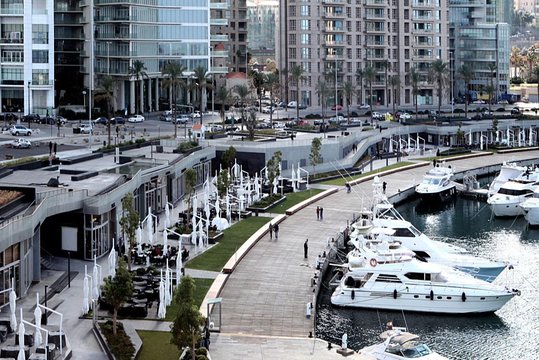 Select Date and Travelers
From
US$66.67
(Price varies by group size)
Date
2 travelers
Options
Free Cancellation up to 24 hours in advance
Reserve Now & Pay Later
Low Price Guarantee
Overview
What to Expect
Itinerary
This is a typical itinerary for this product

Raouché is a residential and commercial neighborhood in Beirut. It is known for its upscale apartment buildings, numerous restaurants, cliff-side cafés and its wide seaside sidewalk, the Corniche, where strollers and joggers crowd the pavements in the evenings and weekends.
Off the coast of Raouché, there is a natural landmark called the Pigeons' Rock (also known as the Rock of Raouché). Located at Beirut's western-most tip, the two huge rock formations, which stand like gigantic sentinels, are a popular destination for locals and visitors alike.

The Zaitunay Bay certainly exceeds all expectations and transcends the national borders to further polish Lebanon’s image and allow it to assume its rightful position as a touristic destination, but more importantly, as an exclusive and luxurious destination rivaling the best the world has to offer. Being the go-to place for all the Lebanese, Zaitunay Bay also inevitably is a prominent touristic destination. A must-see destination offering an array of various, cultural, leisure and social activities which finally brings back those faded photographs of Lebanon into the new millennium.
The Mohammad Al-Amin Mosque, also referred to as the Blue Mosque, is a Sunni Muslim mosque located in downtown Beirut, Lebanon. In the 19th century, a zawiya was built on this site. Decades of preparation to obtain sufficient land adjacent to the old Zawiya led finally to the building of the new mosque.

The Greek Orthodox Cathedral of Saint Georges is the Mother Cathedral of the Beirut Orthodox community. The Cathedral is the oldest church in the city of Beirut, and one of the oldest in the region: the first Christian temple ever built in the very location goes back to early fourth century AD.

During the Lebanese civil war, the Cathedral suffered many attacks of theft and vandalism, as well as effects of nature's impact in a region considered as war zone and confrontation line. In 1998, the restoration multi-phase project started and in 15th of December 2003, the Cathedral opened Her Great Doors.

The Mohammad Al-Amin Mosque also referred to as the Blue Mosque, is a Sunni Muslim mosque located in downtown Beirut, Lebanon. In the 19th century, a zawiya was built on this site. Decades of preparation to obtain sufficient land adjacent to the old Zawiya led finally to the building of the new mosque.

The Corniche Beirut is a seaside promenade in Beirut Central District, in Beirut, Lebanon. Lined with palm trees, the waterfront esplanade has views of the Mediterranean and the summits of Mount Lebanon to the east. Corniche Beirut has its foundation in the Avenue des Français, which was built during the period of the French Mandate of Syria and Lebanon along the seafront that extended from the old town.
The Corniche, which is 4.8 kilometres long, encircles the Beirut promontory from the Saint George Bay on the northern coast of the city, turning west into Place Rafic Hariri, then into Avenue de Paris and the Raouché, and then into Avenue General de Gaulle before it ends on Rafic Hariri Avenue.

Nejme Square, or Place de l'Étoile, is the central square in the Downtown area. It is home to the Lebanese Parliament and its complementary buildings, two cathedrals, a museum, and several cafes and restaurants. Most notable for its Art Deco architecture, the square has become a recognizable icon of Beirut City worldwide.
The jewel of the square is a 1930s clock-tower with its four-faced Rolex clock. The clock tower was gift from Lebanese-Mexican émigré Michel Abed. Today, the square is filled with tourists and locals who come here to dine, walk or enjoy the street life. The square is also known for its noticeable population of pigeons.
In 1994, archaeological diggings underneath the Saint George Greek Orthodox Cathedral in Beirut Central District's Nejmeh Square identified structural elements of the ancient "Anastasis cathedral", but they were restricted to an area of 316 square metres (3,400 sq ft) and failed to unearth the interred Law School of Berytus

Martyrs' Square is a square in the heart of downtown Beirut, Lebanon. In 1931, the historic square took its name to commemorate the martyrs executed there under Ottoman rule. In the 1950s the square became a popular venue for cinemas and coffee-houses. During the Lebanese Civil War, it formed the demarcation line that divided the city in half. Initially Sahat al-Burj, the square underwent a lot of transformations until 1931, where it took the name of Martyrs' Square in commemoration of the martyrs executed there under Ottoman rule. The Municipality of Beirut modernized the square in 1878 as the main meeting place of the city. Beshara Effendi designed a garden with fountain and kiosks, overlooked by the Petit Serail - the seat of Beirut’s governor general – as well as public buildings and souks. In 1950, the Petit Serail was demolished. The new Rivoli cinema blocked the link between the square and the harbor. Martyrs’ Square became Beirut’s bus and taxi terminus and a popular venue for cinemas, coffee-houses, modest hotels and the red-light district. During the Civil War (1975-1990), Martyrs’ Square formed the demarcation line that divided the city in half. In 2005, an international competition was launched for the design of a new square with its axis open to the sea, reestablishing Martyrs’ Square as Beirut’s premier public space and heart of the capital.
Show More
Important Information
Departure Point
Traveler pickup is offered
we pick up travellers from destinations near Beirut city centre
Duration
4h
Inclusions
Exclusions
Show More
Additional Info
Cancellation Policy
For a full refund, cancel at least 24 hours in advance of the start date of the experience.
1Review0Q&A

Write a review
Traveler rating
Traveler type
Time of year
Language
Selected filters
TravelBuff wrote a review Oct 2019
Canada1 contribution
Awesome!
Shawki was a fun and informative tour guide. He really went above and beyond to make us feel welcomed and happy. The tour was great fun.
Read more
Date of experience: October 2019
Helpful
Share
About the operator

This experience only has a few reviews, but you can read what other travelers have to say about the operator.

Jeanette Jane
San Francisco, California
7810
Nice Tour
I am happy to have found this tour and I appreciate their flexibility, as they confirmed us the night before-- at…
Read more